Wasn't A Dimwit To Enter This!

Back in May, yes, I am waaaaaaaaaayyyyy behind on posting mail days, I won a contest over on The Daily Dimwit blog. It wasn't just a surprising contest with a surprising card up for grabs, but I was in shock that I won. Still am.

The contest was pretty simple. You just had to share the big news that he was blogging again. That's it. That's stinkin' it for a chance at a beautiful 2004 Topps Clubhouse Collection relic of Brooklyn Dodgers legend Jackie Robinson.

So I did just that and somehow won the random. Whoa. It wasn't long after that this bad boy arrived. Looks even better in person 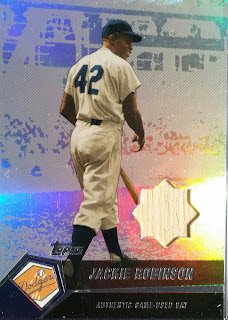 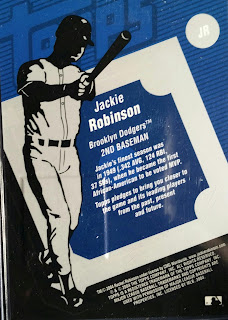 Jackie was on my list of baseball players I wanted a relic of along with Mantle, Maris, etc. So now he can be crossed off. That's only part of the reason why this card is so special. It's also a part of MLB history when you think about what Robinson did for the game breaking the color barrier and playing. Amazing.
Thanks goes out to The Daily Dimwit for the card. If you haven't checked out his blog yet or realized he is back to blogging again, go and do so. Also, he is dying to find some trading partners to unload a lot of stuff so initiate a trade while you are there!
at July 12, 2018