What a game on Monday Night!!!!

Giants trailed by ten at one point vs the 49ers and somehow came together as a team and scored 17 unanswered points and held on at the very end with the 49ers driving 27-23.  It had me on the edge of my seat.

Eli Manning had one of his best games of the season along with the offensive line. Odell Beckham Jr looked like his old self catching 2 touchdowns and it could have easily been three or four with a couple near misses.

Speaking of Odell, his card was included in my Twitch Collects Cards blog mail day. Yesterday I showcased the baseball part of my mail day, today I tackle the Giants. See what I did there?

This may be one of the coolest Odells in my collection. it's acetate and is reminiscent of the Skylines insert of the 90's. I wouldn't mind more of these. 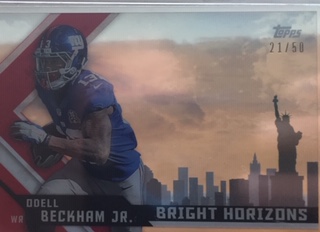 Very cool patch card of Fran Gifford. My first relic of his. 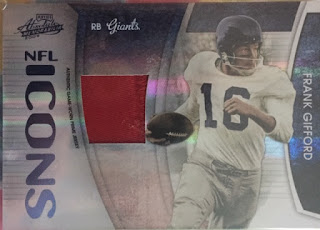 I have always wanted the Topps Chrome rookie autograph of Hakeem Nicks and now I own one. I was a huge fan of Nicks. That guy could take over a game. 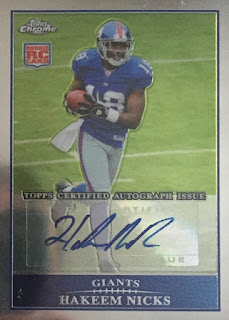 Speaking of taking over a game, Sterling Shepard caught the game winner vs the 49ers. It was a pretty nice catch. He also did a reverse play earlier in the game that netted him 27 yards. This Shepard autograph is what started up the trade conversation between Twitch Cards and myself. I dig the color rush uni on the card and it's also a tough find being numbered 4/10. I believe this is the lowest numbered Shepard card in my collection. 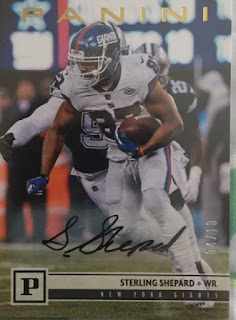 A big thanks goes out to Twitch for the cards!! These Giants were big time winners.

Winners you say? One of my Player Of The Day winners kept their promise if they pulled a Saquon Barkley card they would mail it to me. And they did! 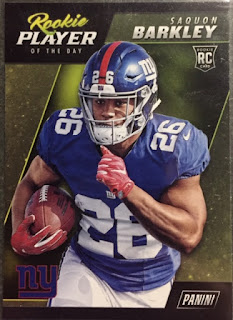 Thanks @GundersonNathan! Much appreciated my friend!