Going into the bye week, the Giants are sitting in last place in all of the NFL at 1-7 after last weeks 20-13 loss to the Redskins. They once again played another tough game on defense, but the offense that was supposed to be their strength couldn't get it together and score. Once again it was that terrible, awful, ridiculous, worthless, offensive, offensive line that couldn't block a gust of wind. Eli was sacked many times, Saquon couldn't get it going, and the play calling wasn't the best and once again predictable as a Redskins defender called it.

I am not sure what to expect from this team when they come off from the bye. There could be lots of changes including one at QB. We will see. Will Kyle Lauletta finally get his chance? Will he actually be able to succeed behind that offensive line? I sure hope so. Especially after today's pickups.


So I am not one who usually sticks his neck out there especially on Facebook groups looking to trade. Well, there is a first time for everything and I am glad I did as I made a monster trade.

The guy had posted up a Saquon Barkley autograph, we will look at that in a second, for trade and I jumped right in. Luckily for me I had the basketball cards he was looking for and I was more than happy to let go of basketball cards for what I got.

The first card isn't a Giants card and was actually a guy who ran all over the Giants, but I have been wanting/needing an Alvin Kamara auto for some time and this is a rookie one from Phoenix. Solid looking card and I love the way he signs his name with the star. Very cool. I have knocked down two of the three autographs I have been wanting and the one that remains is still Patrick Mahomes. 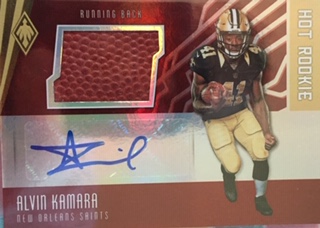 Now onto my Giants pickups.

He had three Kyle Lauletta autos to let go of so I took them.

Origins. Nice looking card but 00's on the jersey makes me cry. 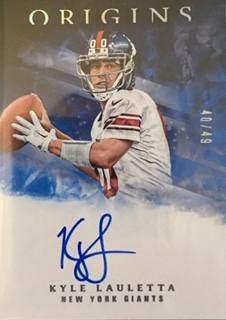 Pen Pals. I had one in graded school. We will talk about that sometime. 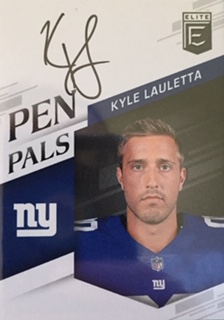 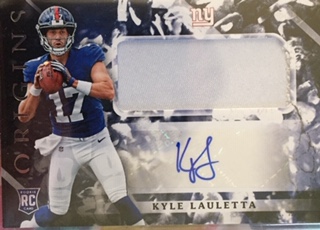 Now the big card that started it all....my second Barkley autograph and my first one in a Giants uni. 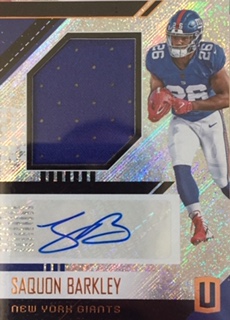 Hopefully it won't be my last of his. I have been trying to initiate more trades for more but have had no luck. I even went back to this same guy who had two more Barkleys' but I had nothing of interest to him including offering up Steph Curry rookie, Anthony Davis Prizm rookie and Kawhi Leonard Prizm rookie and even a Donovan Mitchell Prizm rookie. Not even one blink from the guy. Guess I won't be able to trade anymore with him.

Some great additions to cheer me up in what has been a blue season for Big Blue. I don't think I have ever had to go through this ever with my Giants since I started watching them. They are in a rough stretch the last few years and need some motivation to turn things around. Let's see if that happens after the bye week.
at November 04, 2018