What's The Most You Have Ever Spent?

You ever just think about how funny it is that we spend paper on cardboard? Like it's an exchange of items that are made from a tree.

If only money grew on trees.....imagine how much cardboard we could get in an exchange??

Money is the root of the hobby. You really can't collect without some form of it. Whether it's a little or a lot it is still needed to be apart of the community. It also keeps companies and collectors going and moving forward.

My hobby background had me spending little in my youth, a lot in my 20's, and now just enough for shipping prizes and trades with the very rare occasional new cardboard addition. As I have gotten older, I have gotten wiser with how to use money. If only I had been smarter in my 20's, I might have been better off now. So for those of you youngin's who may be reading this, don't overdo your finances early on. Be smart.

In my 20's, I would go to the local gas station, it served as my hobby shop, and I would easily drop $100 on card boxes at a time. Now I barely can dish out $10 on a Walmart hanger. I would also pick up card singles or go to yard sales and spend $20-$100 without thinking about it. Now I pick up a new card on eBay maybe every other month if I have anything left over from shipping.

With so much turnover in my finances for the hobby, it got me to thinking, what was the most I have ever spent on a single purchase?

So I wanted to take a look back. 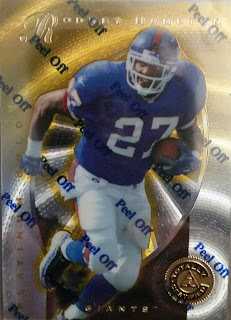 Fast forward, I sat down and thought about my spending at those times. The $160 on hobby boxes yielded me nothing but junk but it did give me joy opening it. The Rodney Hampton card was found a week later at $20 BIN. Should I regret spending $40 more on it, yeah some obviously as I could have used that elsewhere, but it made me happy to have it and finish off my three card rainbow. Finally, the yard sale pickup. I won't ever regret that.

Do I wish I still had those kind of funds today? Yes. But, that doesn't mean the hobby still isn't enjoyable for me. I make the best of what I have and that's still enough to make the hobby fun for me. Big or small funds, the most important part is that it's still fun and never has been about the money.

Email ThisBlogThis!Share to TwitterShare to FacebookShare to Pinterest
Labels: 2018, Opinion Stories, Sport Card Collectors, What's The Most You Spent