The Origins Of A Cardboard Addict: Let's Get Dangerous Part 1

It's all about how I became the collector I am now.

After a couple days away from the 90's, we head back there. So get in the time machine, grab yourself a snack, and let's go!

It was 1991, I was eight years old and raring to watch some cartoons after another day of school. Nothing was better than the afternoon shows on NBC that ran from 3pm-5pm and known as the Disney Afternoon block.

Everyone in my house knew not to bother me for those two hours. It's why I also did my homework at school before I came home so I wouldn't ruin that block of TV time.

The Disney Afternoon consisted of great programming that included classics like TaleSpin, Ducktales, Chip And Dale Rescue Rangers and many others. They would switch them out once was show was ended usually after a few seasons. Even though I enjoyed every show that came in that block, one stood out above the rest.

You remember. The terror that flaps in the night, he was the gum stuck to your shoe. He was Darkwing Duck! He was there to save St. Canard!

A quick recap of the show is the adventures of a superhero named Darkwing Duck who is aided by his sidekick and pilot Launchpad McQuack to fight and protect the city of St. Canard from villains. Darkwing's secret identity is Drake Mallard who lives in an suburban house setting with his adopted daughter Gosalyn. They also have annoying neighbors, sound familiar? The show also tells a deeper tale of a superhero looking to be the center of attention while also trying to be a good dad as well. It can sometimes be a battle of personalities which the best one usually prevailed.

Darkwing always engaged in slapstick battles with both super villains and street criminals some of which were pretty creative villains. It's the reason why I enjoyed the show so much and possibly re-enacted as both bad and good guys outside with friends.

I was such a big fan of the show, I wrote my own comic series based off the show but not using the characters because that's copyrighting. I also owned action figures, a few paper folders with him plastered on it. a couple posters, etc. I was known to others at school as Darkwing. At 8 years old that was one great name to be known by.

Over the years my passion for the the Duck that flaps in the night never changed. Was and is always a fan. However, a lot of my "memorabilia" over the years was lost or sold off by my parents before I went into high school.

Fortunately, being an adult loving nostalgia, and no it's not a midlife crisis, I was able to replace some pieces over the years.

When my local video store went out of business after Netfilix came to life, I was able to snag some really cheap VHS tapes of the show. 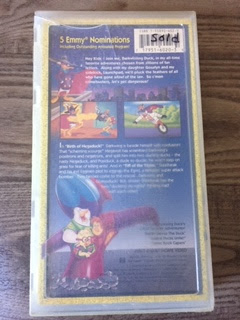 The VHS tape features one of the most common villains that Darkwing had to battle in Megavolt even though the title focuses on the birth of Darkwing's alter evil, Negaduck. We will discuss him another day as today's post is based off of Darkwing's most common, most electrifying and most eccentric super villain, Megavolt!

Megavolt was a super villain created by two bullies who sabotaged his science fair project on static electricity and gave Elmo Sputterspark, his real name, the ability to absorb and project electrical currents, and to grant nearby electrically powered objects a chance to live. The sabotaged accident as well left Sputterspark with portions of his brain fried which made him very eccentric and also made him believe that light bulbs, toasters and anything else powered by electricity have been "enslaved" by Mankind and need rescuing. Crazy is an understatement.


I chose him today because of a recent, new but old, addition thanks to @Jake1725 who was able to snag me some of the Darkwing Duck figures of my youth.

Megavolt wasn't one of my favorite villains, but he was a pretty cool toy. I actually even had two copies of it because I had gotten one for Christmas and my grandmother bless her heart grabbed me another not knowing I had it. My parents had sold them off as I said and ever since I wanted to replace certain pieces.

And here is Megavolt. Even came with his accessories which is impressive as most listings on eBay just has the figure. 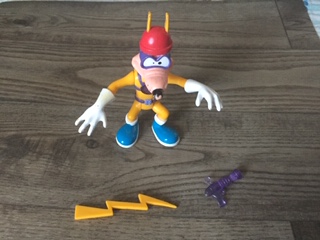 On the back of Megavolt, there is the same mechanism on a lighter. You flick it and on the front of him will show sparks through his outlet. You know, electricity! I tried to figure out a way to capture it on here to show you guys but couldn't get it to work.

But here is a very short YouTube video I found that captures the magic and that of a couple other characters. One of which you may see in another episode.

The memories all came back to me when I to hold the figure again after getting the mail. I went back to that little kid at Christmas time picturing that day my grandmother bought me the dupe brought back warm memories. It was the only time she actually bought me a gift that was a toy.

I may not have the original that she got me, but at least I have this I can use for the memories.

The one thing about collecting whether it's either toys or trading cards, is collect what makes you happy and adding this toy and others did just that. Always remember that when you collect that it's about you and not what others think. Collect what you want friends! 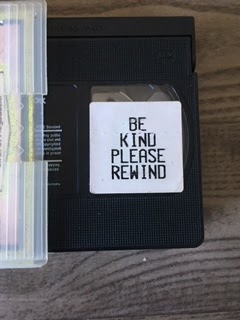 Email ThisBlogThis!Share to TwitterShare to FacebookShare to Pinterest
Labels: 2019, Darkwing Duck, Megavolt, The Origins Of A Cardboard Addict