The Origins Of A Cardboard Addict: There's No Crying In Baseball!

It was 1997 and my father had just finished up another long day of work.

This day of work however wasn't going to end like the rest. He had to play softball that night for his works team for the final time before he got done his job there. He had been working for them since the early 90's and thought it was time to move onto something new since the stress of the job was overtaking him.

He took me to almost every one of his games. It would however require him to come home an hour away just to get me and go back an hour for the game but he didn't mind. He was a diehard sports fanatic and was hoping his one and only son would be as well.

Which in the end turned out that way.

One of the pieces of memorabilia I have from his playing years is this glove. This glove has has been beaten down over the years by many uses including all of his years of softball. After he got done that job and started a new one, this glove became a part of my past. 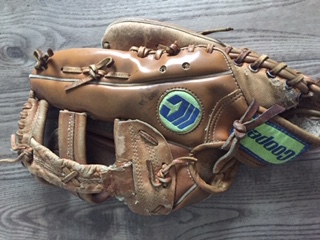 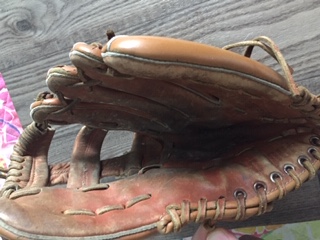 I used this glove all the time for playing duct-taped-up wiffle ball (it made the ball travel further but not sting as bad when you got hit by a pitch like a baseball) with my father, who at the time had a stunningly Randy Johnson resemblance with his long hair. I also used the glove versus my best friend Brian at his house for baseball and on my own when I would throw a softball against our garage, I had a sweet spot I would hit making the ball fly in the air so I would dive to make some incredible catches.

Most of the time the glove did well for me and made me happy when I used it, except once when I was about to close out my friend Brian for my third "championship" against him and he hit a line drive that broke the web on the glove. I gotta admit, I cried knowing how much that glove had meant to me.
I could picture myself as Evelyn Gardner from A League Of Their Own and having Tom Hanks coming over to me and saying, "It's a glove! Are you crying? Are you seriously crying? There's no crying in baseball!!!"

By the way, despite my love of sports, I am not a sports movie fan at all. Feels like the same story lines again and again with some player who rises against the odds. However, A League Of Their Own was an excellent movie and if you haven't seen it, I suggest go do so! The 1992 movie stars Geena Davis, Madonna, Lori Petty, and Rosie O'Donnell who play a professional baseball in a female only league while the young men are out war in World War 2. The girls are coached by a grumpy has-been in Tom Hanks and all of which try to find their fame along the way in the league. The Tom Hanks line I used above is one of the iconic movie lines you will hear in the history of movies. The premise of the movie doesn't sound as good as the movie actually is.

Luckily for me, Brian's mom helped superglue the web back together and I was fine.

I was reminded of this recently when I had gotten that huge mail day thanks to Wes. I had forgotten how great that product actually was. Especially when it came to the inserts and parallels.

Let's take a look at why I feel this way, 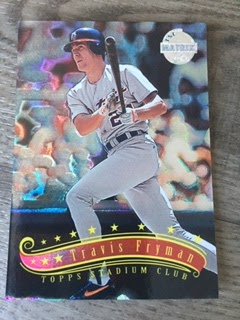 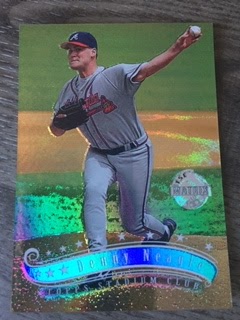 First look at these Matrix parallels that fell 1:12 packs. The base card alone was stunning and as always the photography top notch, but you add this unique rainbow foil layover and your socks will be blown off. Wow! 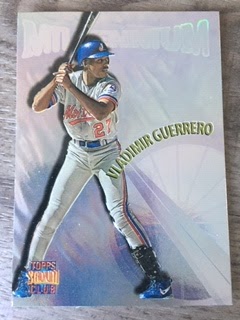 Falling 1:24, were these Millennium inserts. It's not just a foil one either as it appears to have a wave look/feel to it. Really hard to describe it other than unique. 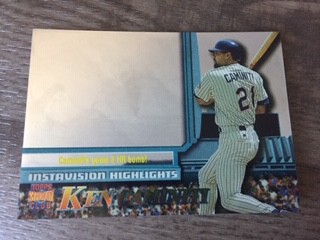 Also falling 1:24 were these Instavision highlights. You must find some good lighting to see the 3D picture that's silver here. 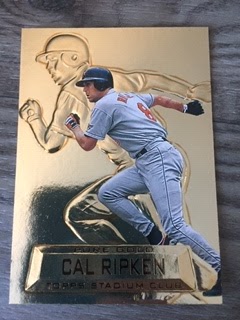 Also falling a tougher rate of 1:72, today's standards any insert falling those odds is junk, are these super cool Pure Gold inserts. The background is all gold foil with some embossing done on the player.

The product also had a few other inserts lines along with the popular Co-Signers autographs that I never once pack pulled but have bought a few of since. Those odds fell 1:95 packs and up depending on the level of player.

As I said, this product was amazing and I still remember spending time ripping open packs in the car of it  with my father when we bought some from the local drugstore. I think we may had even cleaned them out of it at one point.


Football may always be my favorite sport now, but there was a time when baseball meant everything to me mainly because of the memories I have with it. From watching it, collecting it and using the glove playing it, there were memories made.

The flashbacks of the Yankees dominance of the late 90's, the cards like these Stadium Club and every nick, tear, and scruff mark on this glove, along with my father's 3 for 4 standing ovation night (at least I was clapping him off the field) in his final softball game will always be a memory that's a part of my past.

Okay, promised I wouldn't cry again when talking baseball but maybe a tear or two fell while I thought back to all of this. Gotta keep it strong and remember, "there is no crying in baseball....or blogging."
at March 22, 2019