We are on a commercial break on Parts Of My Past with The Origins Of A Cardboard Addict series,

Time to cue the ABC Bumper For Commercial break

with the newest segment, Rodney's Corner. This new segment will feature all of my newest Rodney Hampton additions. This will still stick with the 90's because it's the era Rodney was from and why I collected him.

Today's Rodney was one I have been hunting down for some time. 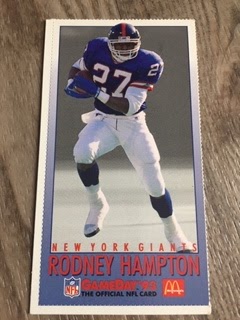 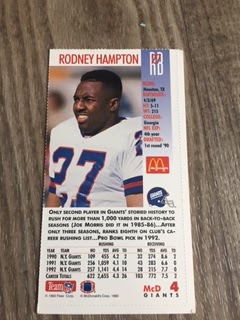 In 1993, Mcdonalds ran a promo with the NFL with one of their game peel off contests. As always, there was instant win prizes for food and drink, there was a chance at Super Bowl tickets and there were also points you could earn as well and save those towards merchandise and six card sheets of trading cards at a participating restaurant.

For ten points, customers received a six-card sheet that done regionally so you would have a chance at possible favorite players from your favorite teams.

For a few years I have been chasing down the Rodney Hampton card from the set with not help in finding it. A few days ago for fun, I was looking up missing Hampton cards and then boom, for $1 shipped it sat there and I said "yes sir!"

It arrived a few days later. And even though I would have preferred the whole sheet so it was perfectly mint, the card was in good shape and I just needed a copy. Maybe if I found a full sheet later on I will snag it.