It was draft night 2019, I sat by the TV watching pick by pick and messaging my sister in law who lives just a few minutes away from where they held the draft. I told her I assume the Giants would take a QB of the future here and it was too bad she wasn't actually at the event to grab me an autograph.

Up to that point, I was all on board with the Giants taking Dwayne Haskins at 6 but something in my gut told me and from hearing reports over the past few days prior, the Giants were going to pass on him and take some guy named Daniel Jones.

I don't watch college football whatsoever so for me I just go by general numbers and consensus of experts on who should be drafted and where. And the most I had seen of Daniel Jones name was a quick video of him Vs North Carolina where he tore them apart on the ground and through the air.

So there I sat fingers crossed for Haskins, who seemed to be the obvious choice after Murray was taken at one. I even would have been happy with DE Josh Allen sitting there as well as the Giants desperately needed pass rushers.

Then came the commissioner across the screen......With the 6th pick of the 2019 NFL Draft, the NY Giants select, Daniel Jones QB Duke. And I just like every Giants fan at the time fell to the ground in disbelief.

However, my disbelief didn't actually last that long unlike many other Giants fans. I began to warm up to the idea and welcomed Jones to the Giants. Once you are apart of Big Blue Nation, why would you ever tear apart a guy. Give them a chance and root them on. You gotta have the faith and hope is everything your team thought he was by drafting him with the 6th pick.

The next day I began finding myself requesting Jones cards to trade for but it wasn't that easy. Nobody had any to trade or if they did, they asked an arm and two legs for them. And I wasn't about to give that up for a guy I wasn't sure on yet. Unlike Saquon that I gave up lots of great stuff for.

I did manage a few base cards here and there. Then I finally wanted an autograph really bad. That's when all of a sudden I went on a streak of adding some through trading and then today's that came via RAK from the great Valley Of Cards. Incredible guy and incredible card. My first Giants uniform autograph relic of Jones. 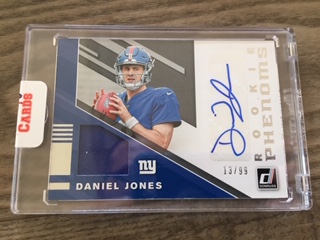 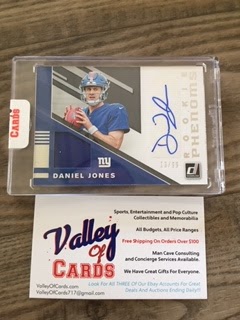 Jones has played well so far this preseason. No interceptions, two touchdowns and some really nice accurate throws. Of course it is preseason and he is playing against second team defenses , so its still hard to completely judge him yet, but his accuracy alone and ball placement is at least a sign of a bright future.

Well there you have it. Big thanks for the RAK goes out to  Valley Of Cards. If you haven't yet, click on the link I included in the previous sentence to check out their website with a vast of unique memorabilia items and check out their eBay stores here for you collecting needs,
Click the link above to visit Valley Of Cards website or check out their eBay stores here for tons and tons of great stuff
https://www.ebay.com/usr/valleyofcards-2
https://www.ebay.com/usr/valleyofcard

Check them out on Twitter as well @ValleyOfCards
at August 29, 2019