Time for another Rodney Hampton show off thanks to Wes

This time we go back before the dufex covered days of Team Pinnacle and look at it's kind of boring origin, though I have always been a fan of the line. 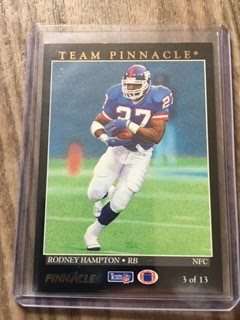 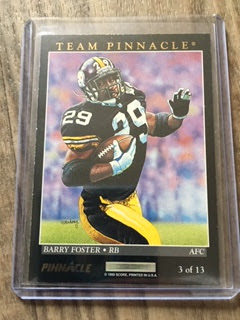 The 1993 Team Pinnacle was a 13 card set, an odd number in a set eats my OCD alive, that features one player from the NFC and it's counterpart in the AFC. They were not easy finds at all falling 1:90 packs. Yikes!

On this card they feature a similar back in Barry Foster for the AFC. I was just glad to have finally knocked this one down. I am starting to accumulate most of the early 90's stuff besides some I don't believe either exist or will be seen.
at September 08, 2019