The Origins Of A Cardboard Addict:I Don't Think So Tim

We didn't have cheesey fake played out reality TV shows to watch in the 90's, well, not as many at least as today. We had some great sitcoms to watch instead. So, so many great ones that even outdo the few that are on TV today.

One of my favorite sitcoms growing up was Home Improvement.

The show followed the life of a Tim Taylor who was a home improvement TV host of Tool Time, well if you call what he did improving things. He had a wife and three mischievous kids, a neighbor who would never reveal the bottom of his face as they hid it every time in hilarious ways and a co-host on his TV show in Al Borland who he picked on constantly about his attire and his mother.

As most readers know, I have spent the last couple of years chasing down autographs whether from a card company or TTM of actors or actresses I grew up watching and have done pretty well. Except you Drew Carey. Curse you!

I have sent TTM requests to Tim Taylor who was played by the great Tim Allen and have received some back before. I have been told though that many are suspicious that his secretary signs them. Makes me want to chase down an authentic signature of him somewhere so I at least have a guarantee. I see many of his 8x10's on eBay are only like $50.

Getting back on topic, one signature I wanted to pair with my TTM Tim Taylor was his co-host of Tool Time, Al Borland who was played by Richard Karn. 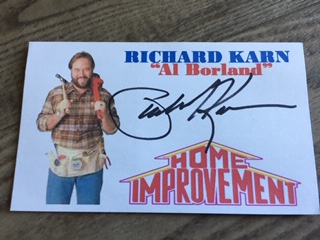 So I used my usual sources for autographs TTM and found one of Karn and sent it out. Within a coupe of weeks, this came to me.

One of Al's favorite lines when Tim messed something up was, "I don't think so Tim" which is a line I use a lot today with family and friends when they do something bumbling. I mean, it's really catchy.

A thanks goes out to Richard for sending me back my request and will be added to my 90's PC. I hope to see you back on TV someday, somewhere. Bringing back Home Improvement would be amazing but not expected. At least I get to watch you and others on the show every night of the week on the Laff network at 9pm. The show never gets old.
at October 17, 2019