The Origins Of A Cardboard Addict: Closing Time Part 3

Closing time
Time for you to go back to the places you will be from. 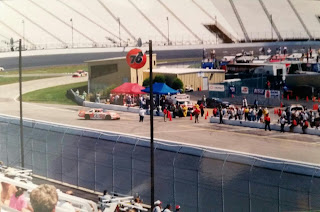 My card collecting days were gone and now I was into rap music, girly music (you know, Britney Spears etc), WWE (used to watch all of the TV events with her brother) and NASCAR (her father was into racing big time so I watched every race and went to a few also) . Not something I had ever pictured myself getting into.

I was a changed person, except on the inside. I still felt something wasn't right.

And boy was I right. The relationship started to hit a few bumps in the road after I had graduated from high school and began a full time job working in a meat department. I think she began losing interest in me despite everything I had given up for her. I had given up everything I knew and changed into what she turned me into. I was cooking her family meals, carrying her books around at school (she was really smart so she had lots of books from big classes) and pretty much everything you would consider a maid or butler to do, I was doing.

In February of 2002, it finally came to an end. The relationship was over. And even though I didn't take it easily, I sobbed for a few weeks, I got over it with time. I think my favorite part was when I went out and spent my entire paycheck a week later just to despise her and used it all on cards. To be honest, it was sort of a relief after the initial break up like I could get my life back together again. Question was, was it too late.

So gather up your jackets, and move it to the exits
I hope you have found a
Friend.

I  moved out and back home with my parents. I went around and tried to find the friends I once had and tried to make amends with each one. Things seemed to had finally turned back to some normalcy. I got back into card collecting, but this time without my father who had sold all of his off after I moved out and no longer collected. He did watch me do so from afar though. I gained back at least one of my good friends and made some others at work.

Most importantly of all, I was happy again. I felt I left a lot of that behind once I got with that girl.

I also began reading a Bible that my boss at work had given me as I was in the search for answers in places I never looked before. Work also changed my life as a month later after my breakup, I met another girl. I know it sounds crazy, after all that I had been through for those two years, but this was different and when you just know, you know. A girl who forever changed my life in a good way. She became my best friend and still is today, 17 years later. This, this was the girl I needed to had met in the first place.

One who loves me for me. One who lets me do this blogging and card collecting and even Madden. Let's me be my geeky self. One I didn't have to change for or let anything go for. The One.

It's like find that 1/1 in card collecting. Once you see that pop up on eBay, you have to grab it or you may never see it again. So glad that I did.

So there was my story of my dark age of collecting. Two years I missed out on. Including a big year in 2000 when I should have been owning some Tom Brady rookies instead of being a slave. However, 2002 was the new 1995 for me as I began picking up steam with my soon to be wife by my side and here I am today collecting more than ever.

Closing time
Every new beginning comes from some other beginning's end.

And speaking of ends, this marks the end of the two year long storytelling adventure of my collecting origins. The series has hit its finale which is why I called this three-part series Closing Time.

Email ThisBlogThis!Share to TwitterShare to FacebookShare to Pinterest
Labels: 1999, 2000, 2019, nascar, New Years Eve, The Origins Of A Cardboard Addict