A really super cool, really unique piece popped up in August for my Rodney Hampton and I didn't hesitate one second to make an offer.

The surprising factor was the seller put it up for auction at $10 or make an offer and I made a $10 offer and they accepted it.BOOM WIN.

The seller must have bought the 1991 Upper Deck New York Giants Super Bowl XXV Commemorative Sheet and had it signed by the players at some point. There is more autographs than featured players on the front of this.

Even though I am a die hard Giants fan and love all of the players that signed this, one player in particular was my aim and I have seen enough Rodney signature to know this is authentic. Mr. Rodney Hampton signed right over the top of his Upper Deck card in the top left corner. 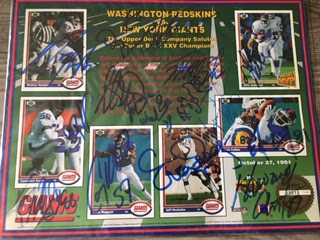 Each of these pieces by Upper Deck is numbered to 72,000 with mine I bet being one of the more unique ones out there.

Now I want just the base version which I see that Dave And Adams sells currently under $10. I just need an Dave and Adams order again sometime. It's been 6 years since my last. Unless I can find a trader buddy who can help.

What do you guys think about pieces like this and have you ever added one to your PC?
at February 02, 2020