There comes a time occasionally I catch myself marking a card on my Rodney Hampton checklist I believe I had then I realized I don't.

Which is where today's card comes into play.

I found that out recently when one popped up onto eBay and I got myself second guessing I had it.

So upon thorough checking, checking it even twice like Santa does his list, I didn't see it. Even checked the cards physically. Nope.

With these being hard to finds, I had to have it and grabbed it. Paid a little more than I wanted to, but sometimes you just have to do what you have to do. These are only limited to 90 made and unlike today's cards, 90 made is not a lot. This is rare. 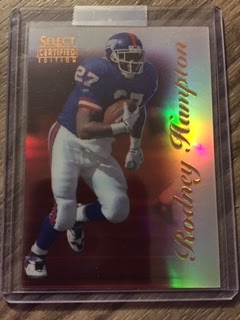 Lots of front shine on the card with the red in the background behind Rodney. 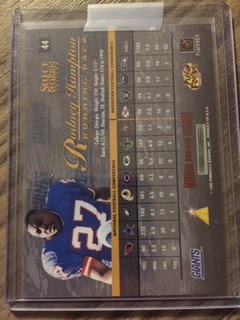 And the official Mirror Red on the back.

Not sure what the odds of these were back then, I am sure it wasn't easy, but just glad I can officially official knock this down.

Now I gotta ask so I don't feel alone, have you guys ever messed up on your want lists before?
at February 16, 2020