What's The Letter Of The Day?

Dennis over at Too Many Verlanders blog was my Cookie Monster/Elmo a few months ago by sending me a Letter Of The Day with the letter Y in the name Barkley.

If you don't get my reference, Sesame Street started a segment back in 2002 featuring Cookie Monster where they feature a Letter Of The Day.

Which by the way, Sesame Street is one weird show compared to what I watched growing up. Once again, it makes me glad to have grown up when I did and once again reminds us why we don't change things.

That can be said for the hobby as well.

Getting back on topic, Dennis passed along in his last mail day a 2019 Elite Spellbound letter Y which was part of the last name Barkley in the set. You know, Saquon Barkley. I had looked at doing the entire nameplate before but couldn't justify pulling the trigger. Thanks to Dennis, I felt like I had to and it was so rewarding.

Every week, I was able to grab a new letter or two cheap and built the green nameplate. There are other colored nameplates to the set but they are numbered and priced much higher than this retail counterpart. 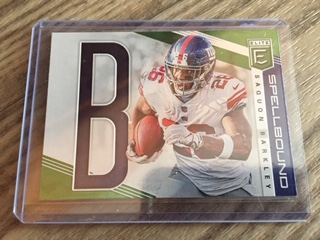 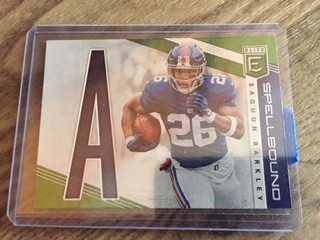 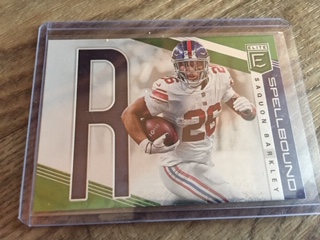 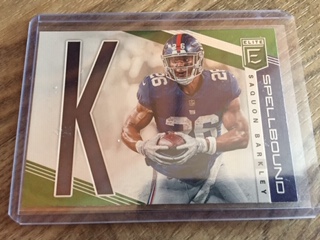 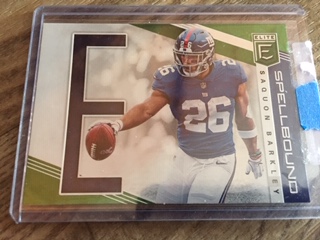 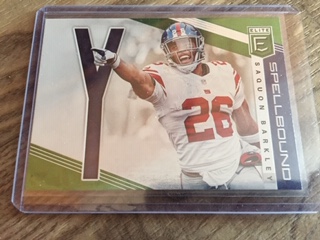 Ain't she a beaut?

After completion, I wanted a way to display such a piece instead of tucking it away inside of the Barkley box. That's when my Twitter buddy @90sNicheFBCard came to mind who has made me some really sweet card stands in the past. So I checked with him and he was more than happy to help. 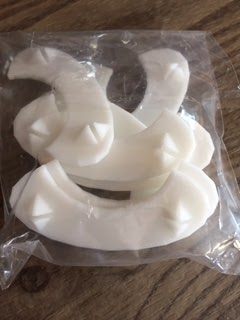 He passed these along in his most recent mail day that I will tackle next week on here. (thanks again for these Bryan)

And here they are beautifully displayed. Just wished my camera had captured them a little better. But, hey, you get the point.

I haven't decided where I am going to display them quite yet. Either on my desk or on my bookshelf.

This was a fun project to tackle, but is just second place to real nameplate. I have always wanted to build an autograph letter or just plain letterman nameplate of a Giants player. Hopefully someday I can do that to . For now, I will just enjoy this sweet little hobby victory.
at February 24, 2020