A little while ago, @BlowoutBuzz had tweeted out an Andy Pettite auto that was up for grabs in a contest he was hosting. He tried to give it away once but the winner never claimed. Never claimed!!

On and off, I have been adding a few Yankees autos to my PC of players I enjoyed watching in the 90's growing up and apart of their dominating teams. Andy Pettitte was on that list of players I still needed so I entered to win.

I can't remember how long the contest went for, but boom, guess who won. You got it, this guy! 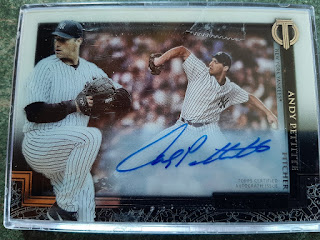 Not only does it knock an autograph need down, but what a beauty in general. Great looking card by Topps. I wouldn't mind more of these.
Glad to have this five time World Series champs auto in the collection finally. A couple of other guys I am lacking still is Tino Martinez and Mo Rivera to complete what I am trying to do. It won't be easy to land Mo.
Thanks to @blowoutbuzz for the contest!
at August 19, 2020

Check out Joshodeezy on Twitch by clicking the image above