Today is Election Day. A day that everyone seems to claim as the day that could change the world, but isn't it that way with every election? I know this one feels bigger with all that has gone on this year, but aren't they all equally just as big? Just a thought. As I said above, I will tread lightly with politics so I won't dive into anymore than that.
But I will appreciate the fact that today also marks a day that those annoying and over done voting commercials/ads with Facebook, Athletes, celebrities, etc will come to an end.
I have already voted today and hope all of you will do the same. I won't tell you who I voted for or what party side I am on, all I will say though is that I will vote for the party or candidates that best represent what I believe in and not just one or two things that follow a trend.
Today's post was originally supposed to be on Cards Over Coffee hence the post name for today but I just didn't have the time to set that all up correctly and needed a political post for today on here so that's why it's on here. So no worries, once again Cards Over Coffee isn't going anywhere anytime soon. I have more posts planned for it but need to make sure this blog gets the attention first.
Back in 2008, Topps released a set of 2008 Campaign cards that were included in their Series 1 flagship product.  These inserts fell 1:5 packs and included 12 cards in the set.
The set included presidential candidates John Mccain, Barack Obama, Hillary Clinton, Mike Huckabee, Fred Thompson, Mitt Romney, Ron Paul, Rudy Guiliani, Dennis Kucinich, Joseph Biden, Bill Richardson and John Edwards.
I pack pulled a good portion of my set, but I am still in need of chasing a few down and sadly need to replace a couple as well that were damaged in my sorting.
Here is a gallery of what I have so far in my set. First I will show off the GOP I have in my set and then show off the Democrats. And no, this doesn't give you any hint of what Party Side I am on its just the order that the card pictures uploaded at so don't read too much into it. 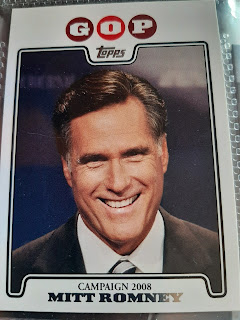 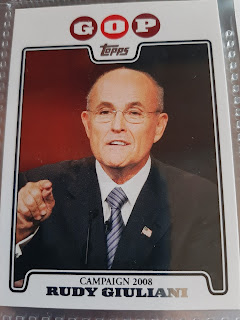 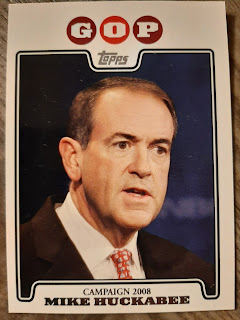 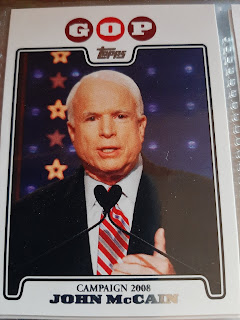 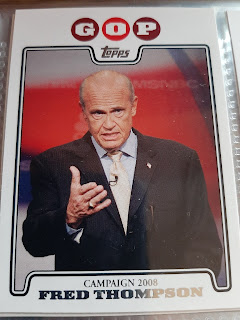 And now onto the democrats, 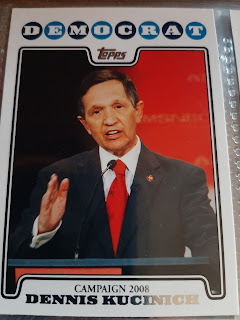 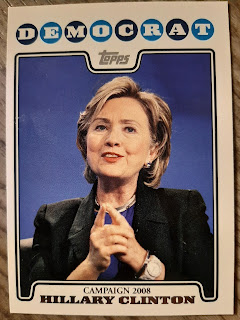 (Hillary fell off my table faster than her poll numbers against Trump and damaged two corners. I will need to definitely replace this card which stinks since it's one of the better names in the set) 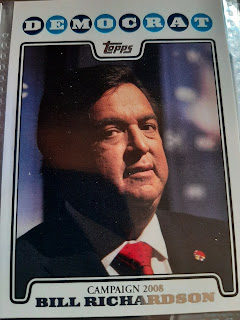 And now onto the Democratic nominee for President, 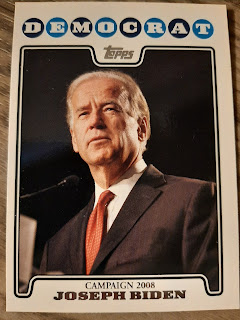 Joe Biden was another card that got damaged along with Hillary's I will need to replace for this set.
I was feeling pretty good about finishing this set until two of the big names got damaged and I am still missing Obama on top of it. Just makes the chase more thrilling which is what I expect from this years election. Not that I am a political person at all. Save that for my nephew who is in his 20's and loves politics. He spent his recent birthday at a debate party if that tells you anything. I didn't watch a minute of that debate and spent my time watching the Giants. Even if the Giants hadn't been on, I still wouldn't have bothered.
I had 9 of the 12 in this set but now will need 5 to complete it. Why do I care about completing this set if I don't like politics? Well, I like political cards and they are for my non sport collection.
So good luck to all candidates running tonight for the Presidential race and good luck to whichever person wins to fixing this country. 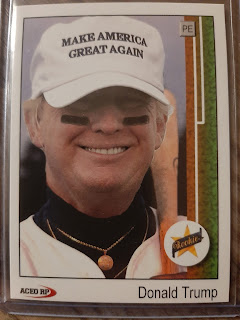 So please go out and vote and make your voice heard. And I will leave it up to you in comments below whether you want to voice your opinion on who you want to win or not.
Because I am simply going to end this with #Kanye2020.
Actually, no.
Or Yes?
Either way I wasn't saying he was a gold digger.
at November 03, 2020