When I saw the contest over at Eamus Catuli blog for Favorite Card of 2016, I said, that's easy. Then I actually thought about it. No, no it's not.

With so many trades and so many box breaks and eBay pickups how could I ever narrow it down to just one????? How did every blogger narrow it down to just one? Even my base card pickups in 2016 were just as big as my hits. It made it a bit easier to narrow down by the fact the card had to be produced in 2016 as a good portion of my pickups were older.

But, still, there was a lot to sort out.

After much back and forth, I went with the play of this guy this season and the Giants finally making the playoffs after a 5 year drought,  Not to mention, it's shiny and my only autograph memorabilia card of the guy.

I am still happy I was able to trade for this from 90's Niche Football Card Blog. 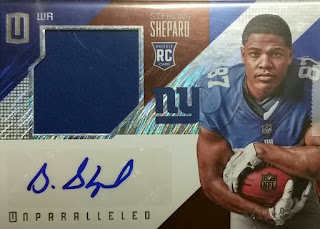