Back in March, I held a contest taking suggestions on what kind of stuff you guys would like to read more about on the blog. Many of the suggestions were toys to non sports to non card items. Well, to please the crowd I will do my best to post those kind of items in this new segment.

Over the years, I have accumulated so much junk. A good portion of it including most of my Starting Lineups and any figures were traded off. I also had a bunch of autographed items I was just looking to downsize with and traded half of those off as well. I still have some to go in that area.

Most of the items I acquired over the years were from purchases in online catalogs, local outlets, department stores, gifts from family, and from a few contests I won. I originally really wanted these items, but as time has gone on and I have gotten older and what feels as my house getting smaller, I decided it was time just to collect cards now. No more adding those markdown McFarlane figures just for the fun of it.

There are some pieces however, I plan on keeping forever. These pieces I will showcase on here.

About 13 years ago, I took all of my Starting Lineup/McFarlane figures over to the closest card shop I had at the time-it was only an hour away but closed a year later after my visit-and traded them off to the shop owner who was selling figures better than cards. I was just happy to lose bulk in my house and I added some pretty sweet cards including a Joe Montana rookie!

A few years after that, my father handed me his two Starting Lineups he had displayed on the wall for years. Normally, I wouldn't be happy about adding more bulk, but, being that these were NY Giant legends, I was okay accepting them.

Up first was this LT. This guy was a game changer. Not something the Giants have had in a linebacker in years and years. 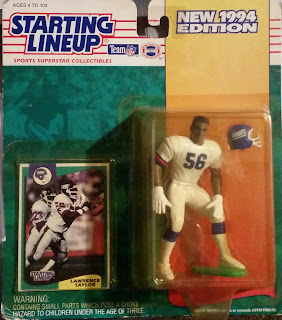 The other was Phil Simms. Can't go wrong with a winning Giants QB. 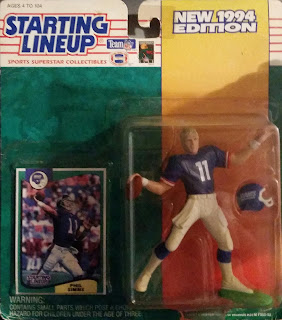 I am actually seeking out the Rodney Hampton Starting Lineups for my PC. That's only because I want it to be a Super PC and feel in order to do that I need it to be jacked up in all ways. I used to think I super collected Ken Griffey Jr and had all of his figures at one point, but I ditched them all in that trade to the shop owner. There was no way I was ever going to get all of his cards. Hampton I have a chance at!

How many of you still collect Starting Lineups or use them as apart of your Super PC collection?
at June 19, 2018