Back in March, I held a contest taking suggestions on what kind of stuff you guys would like to read more about on the blog. Many of the suggestions were toys to non sports to non card items. Well, to please the crowd I will do my best to post those kind of items in this new segment.

Over the years, I have accumulated so much junk. A good portion of it including most of my Starting Lineups and any figures were traded off. I also had a bunch of autographed items I was just looking to downsize with and traded half of those off as well. I still have some to go in that area.

Most of the items I acquired over the years were from purchases in online catalogs, local outlets, department stores, gifts from family, and from a few contests I won. I originally really wanted these items, but as time has gone on and I have gotten older and what feels as my house getting smaller, I decided it was time just to collect cards now. No more adding those markdown McFarlane figures just for the fun of it.

There are some pieces however, I plan on keeping forever. These pieces I will showcase on here.

Today's pieces came back from when I had a love of NASCAR. Back in late, late 90's, I dated a girl whose father was a major fan of NASCAR. Somehow or another, I became a fan fast and never missed a race for a few years and up until 2005ish. Then I lost interest.

During that time I was fortunate enough to attend a couple races during those years and a time trial or two. I also went to a race show in Massachusetts once as well.

Here are a few photos from the races I attended, 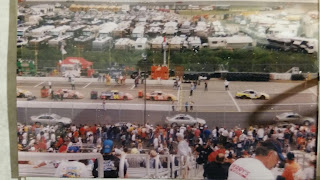 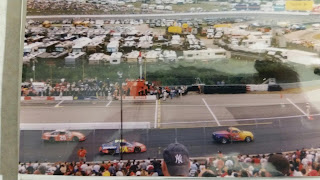 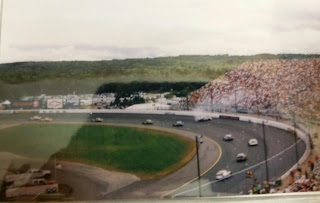 During my love of racing, I turned into a huge Tony Stewart fan. I chased down every car he owned and even chased a few cards of his as well. It was during my dark hobby time-I will touch on this at another time-so I didn't do a lot of cards then. I did manage to snag a couple Tony rookies.

In that time, a company product magazine called LTD, produced a few really cool pieces that I had to add.

First one is of Tony, of course, it has a piece of the Brickyard from the Brickyard 400 and the paint scheme that Tony used to win that race.  (sorry for the dust) 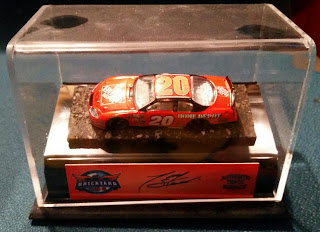 Back side of the piece 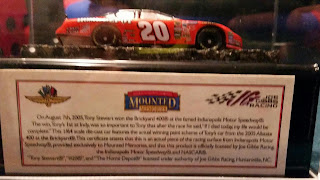 The other one I simply picked up because it was Dale. I was into racing at the time that Dale passed and watched the race he crashed in. I had no idea he had hit the wall hard enough to do what happened but he did. I thought this cool piece from Daytona was a nice collectible. 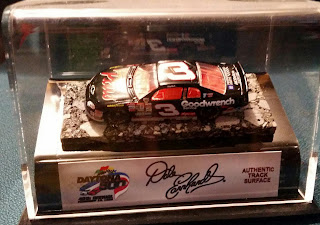 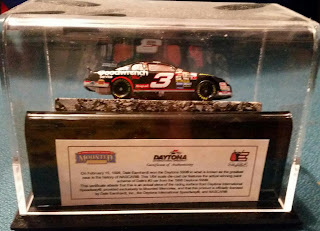 For the most part I sold/traded off my Tony Stewart 1:64 cars including a sick see-through Jurassic Park 3 1:24 I had. But, I held onto three of them. One I didn't show but it was cool as it's inside of a coke bottle. I will show that off another time. However, I am showcasing the two "rookie cars" I held onto. 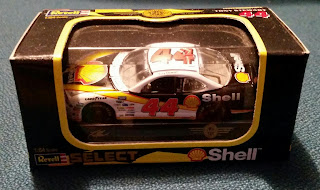 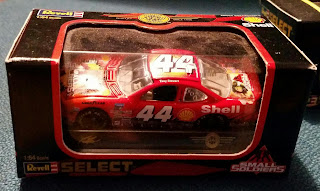 These pieces I don't plan on trading away or losing. Just a piece of memory history for me.

How many of you have ever seen these especially the track swatches? I know Billy may comment on this and maybe has seen these. Also, how many of you are into NASCAR just out of curiosity?
at June 09, 2018