The Origins Of A Cardboard Addict:Topps Goes To Camp 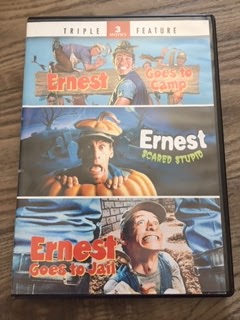 Back in 1987, I can't believe it was that long ago, the movie Ernest Goes To Camp came out. If that doesn't make you feel old, I don't know what will.

I didn't get into Ernest, a slapstick character acted by the late Jim Varney, until the early 90's but I loved every film and so didn't my mother. It was one of those things we both enjoyed to watch together and could time and time again.

One of the first Ernest films I watched a ton of was Ernest Goes To Camp. It stars the key character Ernest P. Worrell, who works as a maintenance man at Kamp Kikakee but hopes to become a counselor. He finally gains enough respect and was given a chance to try out as Counselor. Of course being the goofball he is, they weren't just going to give him just any group of kids. They gave him a small group of juvenile delinquents, the Second Chancers who take advantage of Ernest in a variety of ways.

Meanwhile, a mining corporation run by Sherman Krader wants to mine the petrocite at Kikakee, but Chief St. Cloud who owns the camp refuses to sell. Upon realizing that the Chief doesn't even understand English, Krader manipulates Ernest into obtaining the Chief's signature under false pretenses. Ernest, thought he was helping the Chief sign an anti-pollution petition, instead unknowingly convinces the Chief to sign the land away.Which in return would close the camp and gives Krader everything he wanted.

But, things don't quite go as Krader intended. Ernest realized his mistake and he joins forces with the Second Chancers, who grew to like him as the movie progressed, to take down Krader's operation. I won't go much more into further detail as I assume most of you have seen the film but don't want to ruin it for those of you who haven't.

Watching this film again recently somehow brought me back to 1996 and a product called Topps Gilt Edge. I think it has a lot to do with the background of them as they appear to me as Tiki Totems heads.

Topps Gilt Edge was issued in one series and had a 90-card standard-size set. 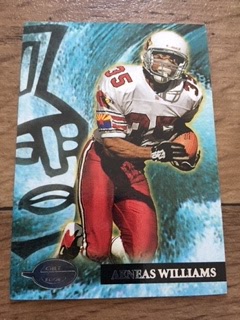 The set features the 84 members of the 1996 Pro Bowl roster, plus five players who had Pro Bowl-caliber seasons and one checklist card. The NFC Pro Bowlers were set with a water blue background. 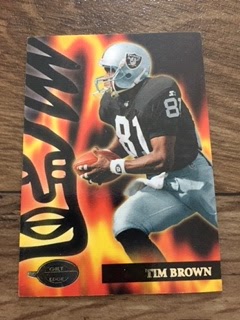 While the AFC had this fiery background.

Each card featured Topps' new "gilt-edge" technology, placing gold foil edging around every card. The cards came in nine-card packs with a suggested retail price of $3.50 which included seven regular cards, a platinum card as well as a definitive edge card. There were no rookie cards in the set and it was a one and done deal for it.

I honestly was 50/50 on the set when it first came out. I only bought one pack and misplaced the final two cards in it. As an adult though, I love this set and need to collect it. 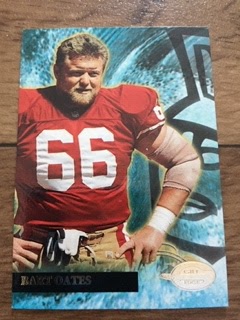 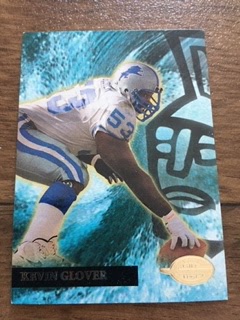 I only have these five cards of the 90 card set, but a long ways to go. Any set help is appreciated!

It's a shame that Jim Varney's life ended so soon. I could picture a few new Ernest movies today being made even though the last few he did were horrible honestly. I will talk about a few more of the movies on here before I am done including my favorite one. Feel free to guess that one in comments.

I always like writing flashback posts like today's. Nostalgia is such a driving force for me and who doesn't like to talk about movies and 90's cards? knowwhatImean Vern?
at September 04, 2019