For a few months now I have been apart of an autograph group on Facebook who share their success and failures. They also share how you can score what they did as well.

A lot of autographs are cool, but ones that come as a hand drawn sketch...those are pretty awesome.

I grew up watching some show with my grandma. You know, Mr Ed, Andy Griffith and of course Dennis The Menace. I enjoyed the moments we spent watching shows she used to watch that I actually enjoyed myself. I can't remember which TV channel, one is to assume Nick At Nite, that used to play all of them for us to watch.

I remember Dennis The Menace well though because I used to pretend I was him getting myself into heaps of trouble with an older guy who worked with my father on the farm. I used to call him Mr.Wilson but he was much meaner than that actually. 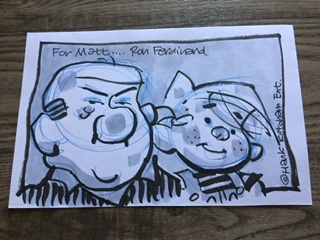 Anyways, one of the things they shared on the Facebook page was an email address for Ron Ferndinand who is an artist for the comic strips of Dennis The Menace and after seeing a few really cool pieces I thought I would take my stab at it knowing I was a fan and bringing back those memories I had with my grandmother.

So I sent off an email and Ron was more than happy to oblige. In just a few short days this piece above arrived. It's so cool!!!

A thanks goes out to Ron for taking time out for a fan and sending off such a cool piece. So far everyone who has asked him for one has gotten a different sketch which is really great of him to take time out to

Email ThisBlogThis!Share to TwitterShare to FacebookShare to Pinterest
Labels: 1/1, 2019, Dennis The Menace, Sketch