The Origins Of A Cardboard Addict: Family Guy

Back in the 90's, I was a huge Simpsons fan. I watched it every night of the week and never missed an episode til I got married. Now , I haven't seen an episode in 17 years other than the Simpsons movie which I own.

It would take me a lifetime to catch back up on those now. Another show that I started to watch in 1999 was another comedic cartoon that I thought I would enjoy and I was right.

At 16 years old, I was just getting into that odd comedy age of understanding the kind of jokes that Seth MacFarlane spun off on the show Family Guy. And I loved every bit of it. Never missed an episode and actually got my wife into the show for a few years before Seth was stretching some things too far that we didn't agree with, so we gave up on it.

However, every now and then, I will take a look back at some of the earlier episodes in 1999 and early 2000's that made me laugh.

The voice cast had some great actors I knew in other TV shows/movies, but none more than Alex Borstein. who voiced a couple of characters on the show and writes for it as well. I knew of Borstein because of her time on MadTV which I enjoyed more than SNL. Yup, probably one of the very few to admit that. Her role on MadTV, also a 90's show, as Ms.Swan was hilarious.

I bought MadTV seasons just to watch her in that role. Well, besides watching Michael McDonald starring as Stuart. 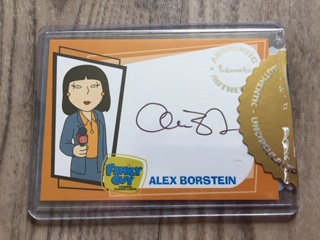 When I saw that Dion's Autograph collection had a Borstein autograph, I had to inquire about it. At first he was hesitant in letting go, but I managed to show him how much of a fan I was and landed it. Very cool card and on card autograph. I do wished it was Alex as Lois, but hey, I can't be a picky.

A big thanks goes out to Dion for letting this go. Glad to have this for my PC now.

I look forward to maybe adding a couple more autographs from the Family Guy set, if I can find them affordable, of actors I need for my non sport PC.
at September 11, 2019

Email ThisBlogThis!Share to TwitterShare to FacebookShare to Pinterest
Labels: 2019, Alex Borstein, Family Guy, Rittenhouse, The Origins Of A Cardboard Addict