One of the things the last few years I have found most thrilling about collecting celebrity autographs is the fact they don't have fluctuating values. It's not like they going to get hurt acting then be out for a season or be a top pick in a movie and completely disappoint. Well, I guess you could say that but they will be back again on top next time.

Not that value completely matters to me but it's nice to know if, IF, that day ever comes and you need to sell, that celebrity items stay pretty much level on what they are worth unlike sports cards. Overall to me though, value doesn't matter.

It's about the memories made by the cardboard, the person on it or the person I may had done the trade with.

My latest addition to my non sport PC has a couple of those things.

One thing, @Jake1725 has been really good to me. Both as a friend and as a trader. I have found some really great traders who will go above and beyond for me such as Jake.

Second thing, I don't quite remember what I was searching for, but somehow I found out that John Travolta had an autograph card and I knew at that moment, it was a goal to get one. 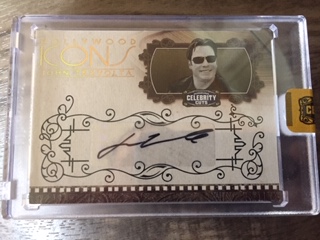 Well, because of Jake and the magic of trading, here it is! Such a beauty despite his not great signature! 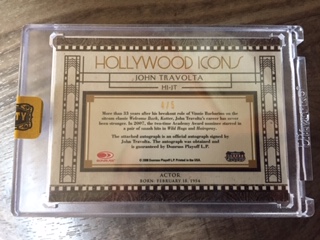 Numbered 4/5 even on the back.

I watched John in quite a few films such as The Look Who's Talking trio, Face Off (one of my favorite films), Ladder 49, Wild Hogs (a great underrated film) and Old Dogs that was quite hilarious just to name a few. And before you ask, no I wasn't really a Grease or Saturday Night Fever fan. I know that may offend some.

A big thanks to Jake for landing currently the biggest autograph card I have in my non sports PC. Will there be another big add to it coming down the road? Time can only tell.
at September 23, 2019