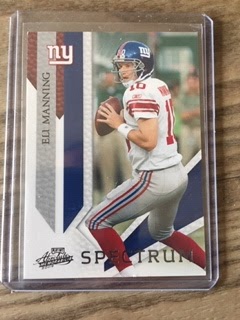 I don't always check my Hotmail more than once a day, but when I saw one from Nate over at The Buc Stops Here blog I had to check it out. Him and I had never done a trade before but I am always welcoming to new blog traders. Not to mention he told me he had two cards off from my Top 20 want list which is located on the right side of the blog.

He kicked off a streak of luck I had narrowing down some of those wants but still many to go.

Nate not only sent along the two cards off from the list, I will get to those in a minute, he also sent two Eli Mannings I didn't have as well. I have and always will be a fan of Eli and root him on. I am not quite ready to see him step away yet. Maybe after this year. He looked good in the first game I thought other than one or two plays that should have gone elsewhere. He also showed a little life in his long ball with the Hail Mary before halftime. Now if only the Giants defense had the same life. I said this on Twitter and will say it here, I could have thrown a TD against that defense. No pass rush and no coverage. Terrible and they lost because of it. It's like a repeat of last year all over again. 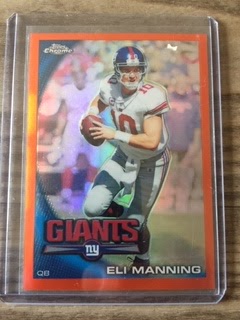 One of the Eli's he passed along was this Orange Topps Chrome refractor. The other is a Absolute parallel above.

The two cards he really had me hooked on was the ones on my Top 20 want list and ones that help my chase for the 1997 Topps Chrome football set I am hoping to build after a 22 year hiatus of owning it. 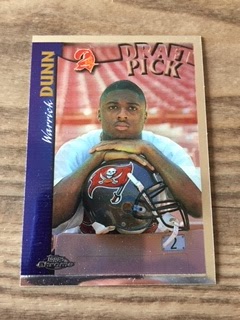 First card is this Warrick Dunn rookie showing off the Buc's new helmet. No more orange. 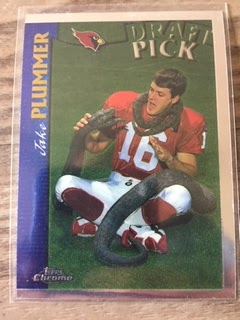 And the second one was probably my favorite base of the 90's, the Jake Plummer rookie. Such a great photo of Jake The Snake Plummer with a snake. Doesn't get any better for a base card than this. All of the photography for rookies in '97 Chrome were probably the best there was.

Thanks to Nate for the mail day. I haven't been posting many mail days on here as of late. Trying to catch up in the next month on backlogged series posts with most of my mail day ones being posted on Twitter. I don't however post Blogger mail days there. They go here.

Looking forward to trading more with Nate down the road.
at September 12, 2019