Blast From The Past:1999 Bowman Chrome Football 1 Pack Break

This segment takes a look at products that may have been hidden in a underground fallout shelter for over 20 years and now just coming back out to be rediscovered....by me. Guess you can call me Adam even though my name is Matt. These are products I opened when I was first collecting and is a Part Of My Past, but may not have a memory or a Origins story to attach to them. Most products I post on

Labels
here will, but some won't and those will be covered in this new segment.These products will be between the years of 1995-1999 only.

So let's take a Blast From The Past with a one pack break of 1999 Bowman Chrome Football!

I found someone on eBay selling packs of this for $1.99 and who can turn that down? I had an eBay gift card to use up and what better way to do so then to buy a retro pack to break especially one I broke in my youth and one that is covered in chrome. 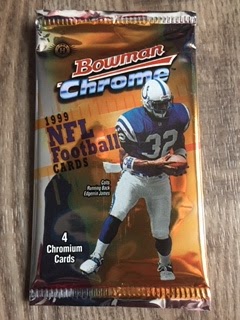 Each pack of Bowman Chrome comes with 4 cards. Just like it's Topps Chrome counterpart 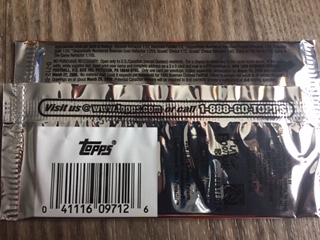 Here are the pack backs

Let's see if anything bodacious pops out. 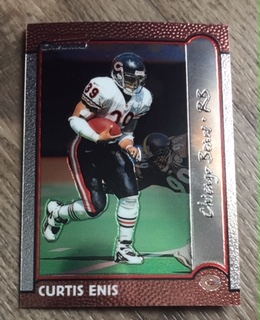 Enis was a Top 5 draft pick that only made it three years in the league after not living up to expectations and many injuries which forced him to retire early. 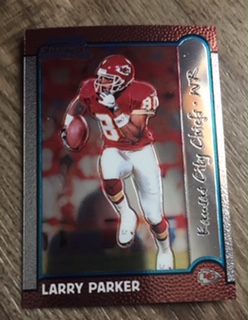 Larry Parker Jr was drafted by the Chiefs in the 4th round of the 1999 NFL Draft. Didn't get to play much and career wasn't long only lasting a couple of years. 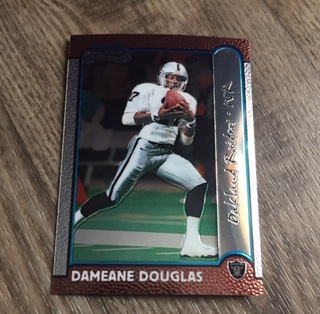 Douglas had a career of injuries playing four seasons in the NFL mostly with the Eagles after the Raiders drafted him in 1999. 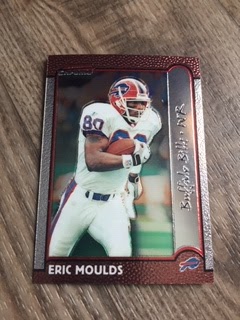 Eric Moulds was the best player from my pack. He played 12 seasons for 3 teams and made 3 Pro Bowls

Well this was a blast from the past in terms of player names and card design, but overall, a very painful pack break. At least I get to have experienced it again and bring back those warm memories.
at September 28, 2019

Email ThisBlogThis!Share to TwitterShare to FacebookShare to Pinterest
Labels: 1999, 2019, Blast From The Past, Bowman Chrome, Curtis Enis, Eric Moulds