Appreciation Of Being Action Packed

While my sister was collecting Mood Rings, Bubble Watches, and Feather Accessorized items, I was still into collecting sports cards and watching cartoons in 1995.

Up to this point I haven't mentioned anything about my younger sister, but yes, she exists. I mostly spent my time keeping her away from destroying my card collection when she was having one of her hissy-fit meltdowns something that happened often.

We didn't have a lot in common besides our parents. But, one thing we did have in common is appreciating the little things in life which is something I still do today. Make every big or little moment count, if someone buys you something you treasure it no matter if you like it or not, and what you do own, treat it with respect and don't destroy it. My parents weren't the richest people by any means and what we did have for clothing, shoes, and other items we knew we had to put it to its best use and treasure it for as long as we could because my father worked hard for what we did have. We were also fortunate to know a lot of people who donated hand-me-downs and helped us out when they could. I think a lot of today's youth is missing this kind of respect in their lives as today's motto feels, the bigger the better and they are always needing an upgrade to something. I giggle to myself as  I am still typing on an old desktop doing a blog and not some fancy laptop.

I know I discuss my father and how invested he was in the hobby often, but he didn't have a lot to invest and what he did invest was only because he liked having those bonding times between us. It seems like we bought a lot of cards, but it really wasn't that much.

What we did have though, I spent time sorting, organizing in binders, putting in top loaders and treating with respect. Every card mattered no matter what it was. I appreciated every single one knowing what it represented. I still do the same with every card I have.

Speaking of appreciation, I really appreciated 1995 Action Packed football. It didn't have a lot of glimmer and glam but it did have something called embossing, which was new to me in the hobby.

This 126 card set featured embossed color action photos, team's helmet, player's name and the words Action Packed 1995. If you don't know what embossing is, it takes those items and "raises them" giving them a textured feel.

Here is a small gallery of the cards. It his hard to see the embossing on here but focus on the last name on the right as they may give you the easiest way to spot it. 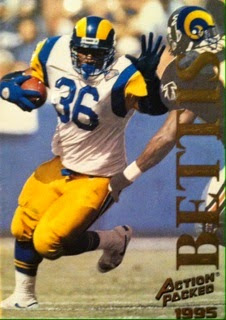 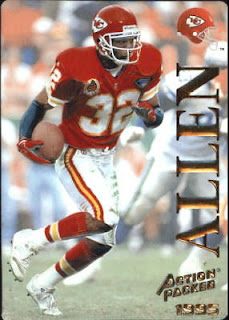 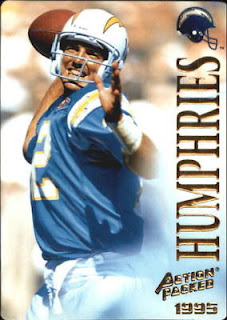 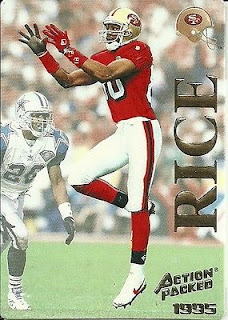 The rookies featured the names on the left. They were also still in their college uniforms with the team logo representing where they got drafted. 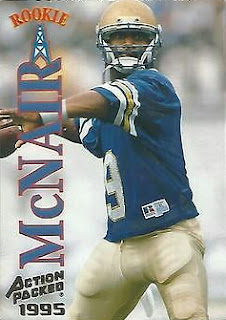 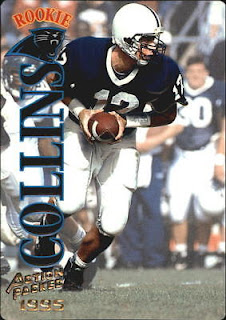 I never pulled any of the inserts which included, 24Kt Gold, Armed Forces, G-Force and Rocket Man, but I did pull quite a few of the one in six packs "Quick Silver" parallel. The parallel took the base cards and added a foil background on the front of the card and put the words "Quick Silver" ghosted behind the writing on the back. 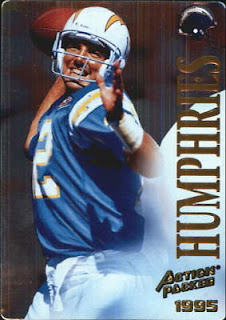 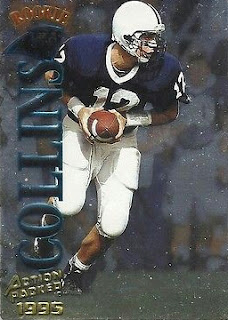 I always thought the product name was a perfect fit. The embossing of the card helped give it a action packed feel like the players were jumping out at you.

This was just one of three Action Packed releases for football in 1995. The other two were Rookies and Stars and Monday Night Football which I also busted a little of each.

I still have all of my Action Packed cards to this day and appreciate them as much as I did back then. I also still have my sister, haha, who I appreciate more now then I did then too. Because when you start to get older, you really appreciate people and things more then you ever did.
at August 17, 2017