The year was 1995 and my sport card collection continued to grow. We were still picking up packs left and right from the grocery store and pharmacy, I was increasing some trading with my friends on recess and we had just discovered a new place that sold cards, the local craft store.
This store was mainly craft items, but had a few odds and ends mixed in as well. It was called May Store.
My grandmother, the one who had held onto a few of my childhood toys til she passed away in '04, had wanted my father and I to run an errand for her to the May Store since she was no longer able to driver herself. How could we say no to a woman who was always so generous in helping others and one that despite her diabetes acting up, held each family holiday event at her house with her homemade stuffing, homemade beef stew, and tremendous raisin pie (sounds gross but really isn't).
So we took the trip expecting it to be a quick run in and out, well, that wasn't the case. We walked into the store and immediately discovered a whole shelf display of cardboard goodness. There were old friends of 1995 Fleer football, 1995 Collectors Choice baseball, 1995 Sport Flix and one new one called, 1995 Pinnacle Football.
How could we resist not trying out a new product? So we did.
We were quite impressed with the base card design. Full bleed photography with a football shape enclosing the players name and position at the bottom.
There were some great action shots as well. 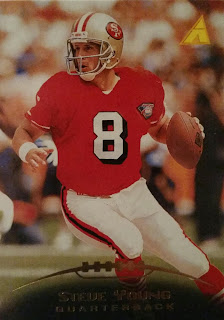 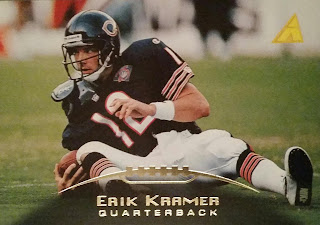 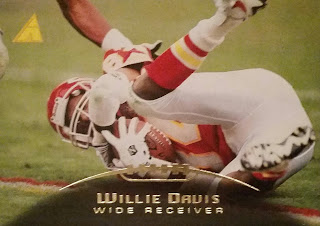 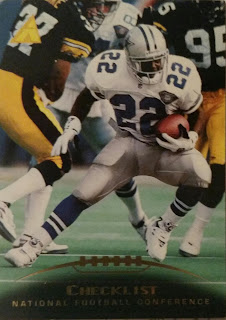 The rookies were "posed" type photos most likely taken at the premier. 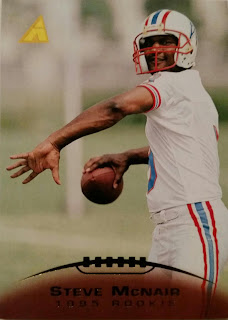 This was one of my favorites of the rookies. 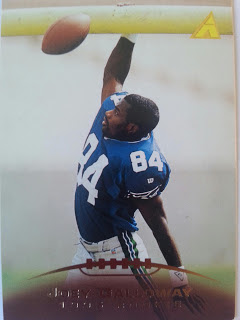 The base set was 250 cards consisting of veterans, rookies and checklists. Card #251 was issued in Jumbo Packs and was Deion's first card Cowboys card. We didn't find any jumbo packs there so I never landed that card.
In one of our packs that day, we pulled this card to find out later on it was a Trophy Collection parallel that fell 1:4 packs. The dufex technology made these cards really stand out. 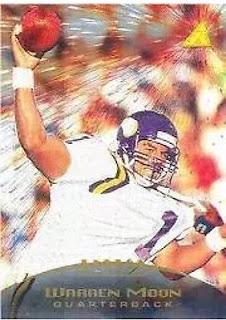 We had gone back a few more times and picked up a few more packs each trip. We never hit anything big other than the Trophy Collection parallels.
One card that one of my friends had pulled was one of these Clear Shots that fell 1:60 packs. It was a beautiful mix of acetate and rainbow cardboard foil. I really wanted one but never did end up with one. 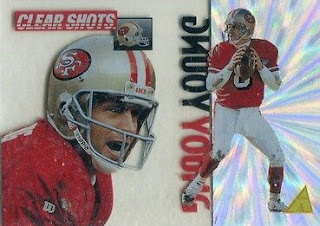 The Clear Shots cards are also officially on the Sets I Am Seeking list. So if you got any and wanna donate them, let me know! I currently have none so any will help.
Pinnacle also had these cool finds in 1995 that includes, Team Pinnacle  that fell 1:90 packs, Artist's Proof parallels that fell 1:48 packs and Showcase that fell 1:18 packs.
The other thing I wished I had was my grandmother's raisin pie recipe.  I forgot to grab it when I had the chance and now it's lost forever. However, I did always keep her homemade stuffing one we did together every year that's really easy to make.
It's so easy that I will share it. Here's the recipe:
Take 2 loaves of day old set out bread crumbled up, one onion,  some Bells seasoning to your taste, a couple cups of boiling water. Mix it together and bake for 30 minutes.
Enjoy!
at August 15, 2017