I was going all-in for card collecting. I started sorting cards by brands, star players, and rookies and putting them into binders, boxes and sleeves. I had a notebook where I kept track of how many cards of each we had and what they were. I was also reading the backs of card wrappers like a book and studied the odds of each.

1995 also had taken our grocery shopping trips and turned them from trips for food into trips for cards as new releases came out.  We also began to discover that local pharmacies and the big local box store Ames carried packs in a drop down case as well.

Cards were starting to appear everywhere! Such a great time to start in the hobby as opposed to today.

With my growing knowledge of football, the sport I began to know best and collect the most of, I started recognizing names, players and teams that were good. You know, the Cowboys, Steelers, 49ers, Packers, Favre, Rice, Montana, Sanders, and Smith to name a few.
I also grew into a NY Giants fan after my father, so I was always on the search in packs for Giants especially Rodney Hampton who grew on me. My knowledge was also was starting to grow in other sports as well, but I was mainly football still at this point.

One of my most consistent buys of 1995 was Fleer Football. I know many of you shudder at the product for it's design, but it was quite sharp for a 12 year old boy. I can't remember how many packs of these we bought at the grocery store. But, it was enough to help us fill some of the insert sets and almost a base card set. 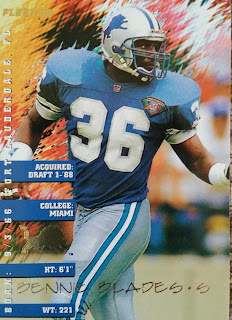 One of the insert sets we almost filled just from packs alone was , the 1995 Fleer Flair Preview Set. These cards looked amazing and I was happy just to open the packs to find one of these per-pack. Just from packs alone we were able to accomplish all but one card in the set. That final one took me another year to chase down and to me was the most important one, the Rodney Hampton. But, thanks to some hobby love, that was fixed. More on that in a different post and you will have to wait til we hit 1996 to find out. 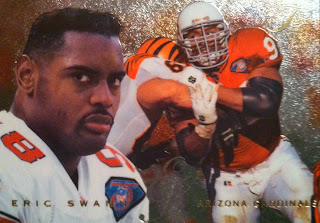 The Fleer Provisions set for 1995 was really cool and was the first insert set we were able to put together. It was a very exciting moment. When you put all of the cards together they made a puzzle. Sorry I couldn't find the rest to show you right now. 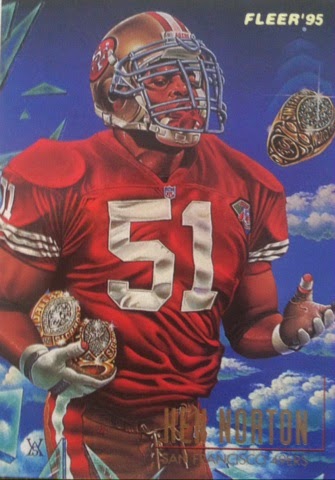 Gridiron Leader was a groovy dance floor looking insert we fell a few cards short of from filling the set of. Someday I may try to chase them down and get this one done. The background colors on these matched the teams color scheme. 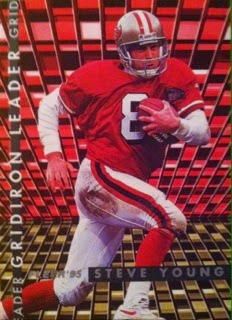 TD Sensations was the second full insert set we completed. It was full of big name stars like Jerry Rice, Marshall Faulk, and Emmitt Smith. I couldn't remember where the last card in the set went but it's buried on my desk somewhere. 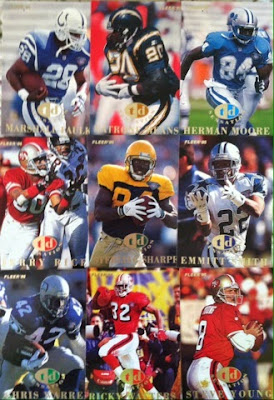 Fleer was only one of a few handful of products I bought a good amount of. As we move along I will discuss a few others including one that provided my first big pull.
at August 05, 2017