“It Counts And The Foul"

As 1995 went on, I started to learn more about basketball. I started to sit down and watch games when they came on NBC-remember I didn't have cable and I only got NBC because of a makeshift outside antenna my dad had created-and the sound of Marv Albert's voice doing play-by-play was spectacular and it was really hooking me in.

When growth and interest in a sport comes, so doesn't the growth and interest in collecting cards of a sport. I think we sometimes forget that no child will be interested in collecting sports cards in today's era if they have no interest in sports. Both things come hand in hand. You can't collect a Eli Manning if you don't know who Eli Manning is. Just like I couldn't collect a Charles Oakley if I didn't know who he was. Which I started to know more about the rebounding beast.

I was a little late to the party in getting 1995-1996 Topps Series 1 basketball, but the new Series 2 had just come out. So I had to give it a try and it was affordable as well. 10-card packs were $1.29.
It didn't take long before I was hooked on wanting more. The 110-card base set had a white border along with a full-color action photo and the player's name in gold. It was very eye appealing. 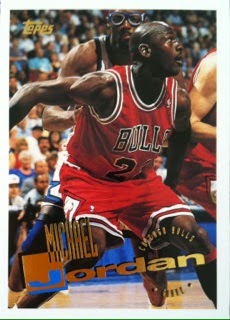 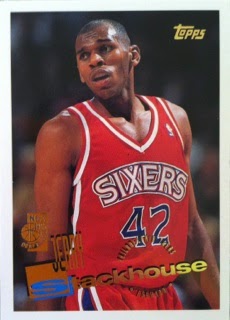 I was very fortunate to pull a Booster parallel after a few purchases-not the one pictured as I pulled this one a few years ago and just using this as an example-and that wasn't an easy pull falling 1:36 packs. There were also a couple of really cool 90's looking inserts. One thing you could always count on in the 90's is inserts with foil. I wished more had foil today.
Joe Smith looks ready to Rattle And Roll into a new dimension 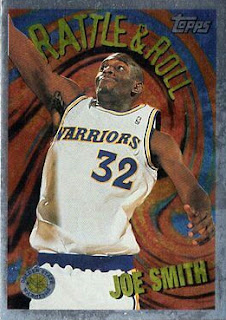 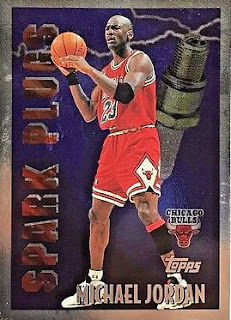 I was not fortunate enough to pull a Mystery Finest back then. I have since then pulled some as I busted two boxes of this back in 2015. I actually landed these cards as my Mystery Finest pulls:

It wasn't too long after busting some packs of these to go along with my Fleer where I needed to hunt down a basketball price guide. Luckily, my friends uncle had some older issues he handed me.
I don't collect or watch basketball anymore today. The game has changed, the announcers are lame, the cards are from one company that doesn't even own the rights to two of the biggest names autographs, and I just prefer my time being spent elsewhere.
I am very thankful to have grown up in what was the best era of basketball and best period of collecting basketball cards.
at August 24, 2017