Show of shares on this post, how many of you read the title of this post in Batman's voice? I know I did and I typed it.

Other than my usual Disney cartoon block I watched after school, I had to make sure I tuned in for Batman:The Animated Series as well. The show ran for 3 years from 1992-1995 on Fox Kids. The cartoon for the final 15 episodes had changed its name to The Adventures Of Batman And Robin. Not sure why, but it did.

The show had some great story lines, incredible animation and the best villains. Some of them include, Mr. Freeze, Poison Ivy, the Penguin, the Joker, Harley Quinn, the Mad Hatter, the Riddler, Catwoman, Two-Face and my favorite Clayface.

The show was so popular it ranked second in the best animated series only losing out to The Simpsons, spawned a toy line, all of the toys are on my want list, and had some trading cards from Skybox in 1995.

I was lucky to bust one pack. I am not sure what kind of pack it was as most of these packs had 8 cards per pack and this is 11 cards. I can't remember the details on that but here is what I got from it. I have had these stored in a 50 ct plastic box all these years. 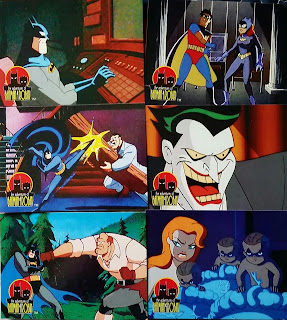 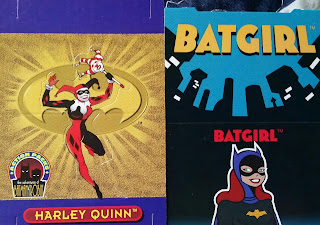 Coloring card. Looks to me like they were trying to draw kids in. Literally. A puzzle card as well. I left it whole as puzzles are my enemy. I can't even put together a border. 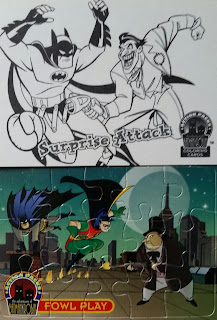 And one of the coolest things, a "stamped" piece of gum. It held up over time as well. 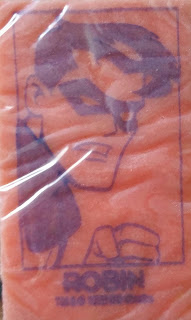 I think my pack break went pretty well. I might try to track down a few more packs to open for fun but I am currently more interested in adding some figures from the show. Particularly Batman, Robin and Clayface.
This was actually my only other non-sport pack bust of 1995. We will continue to check out my busting origin through sports from here on out.
at August 13, 2017