Up to this point, I had cards that were shiny, cards that looked cool, and cards that had 3D appeal, but none that moved. Yes, at one point, with a flix, I mean with a flick/tilt of a card you could make the player move from one position to another. Sport card innovation at it's finest when they started utilizing lenticular cards back in 1983 but sadly wasn't discovered by me til 1995.
Jumbo packs of 1995 Sport Flix were plentiful at my local pharmacy and I bought plenty of them. Yes, a pharmacy did at one time carry cards and I know Rite Aid does some today but not like back then. Cards in the 90's could be found everywhere. Today, I am lucky to find a few packs at my Walmart which is an hour drive as opposed to the pharmacy that's a 10 minute one.
1995 Sport Flix Football had 175 cards in the base set to collect. There were 118 regular cards, 30 rookie cards, 20 Game Winners cards and 7 checklists. I tried my best to capture what one of these cards in motion looks like with this "ministry of defense" card. I think I did pretty well with it. He goes from a Defensive End position up to a pass rush position against a Buccaneers offensive lineman with just a tilt of the card. 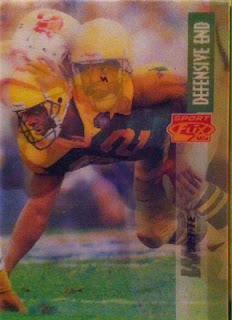 Two of the subsets in Game Winners and 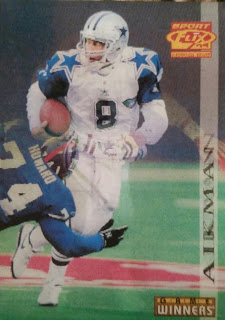 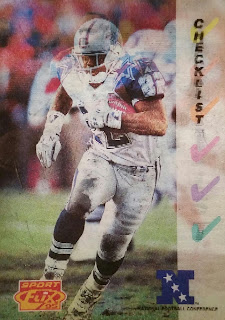 However, the rookies weren't as cool as the players didn't move and only their name did. They were very colorful though. 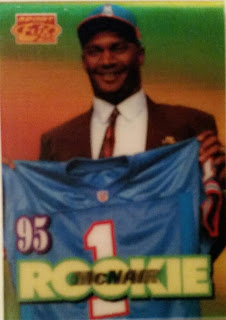 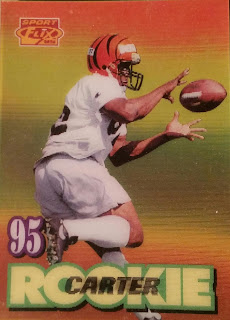 The product had Artist Proof parallels which I was never fortunate enough to pull a single one. Most of what I got was base cards.
When it came to inserts, I pulled one from many, many breaks and it was only 1:8 packs to be found. But, at the time it was a good one featuring top players in the game.
I pulled a Man 2 Man of Troy Aikman/Dan Marino. Even though the card didn't move, it looked really cool with the 3D appeal and a football that seemed to jump out at you. Since then I have added some others from a trade with 90's Niche Football Card Blog. I really want to chase down the 12 card set.
Here is what I have so far: 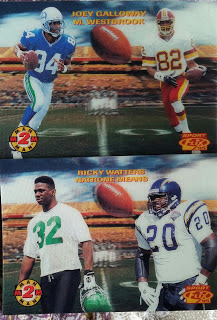 Here is the full checklist of ones I need:
Emmitt Smith / Marshall Faulk
Drew Bledsoe / Kerry Collins
Barry Sanders / Ki-Jana Carter
John Elway / Heath Shuler
Jerry Rice / J.J. Stokes
Kordell Stewart / Warren Moon
Brett Favre / Jeff Blake
For now, this will go under my tab of Sets I Am Seeking. Hopefully all of those sets will someday will fill up my PC.
Other inserts I missed out on in this product were, ProMotion, Rolling Thunder, and Rookie Lightning.
Speaking on missing out, I believe this was the last year they made football Sport Flix cards and I think the hobby is really missing out on something like this. They only existed for one more year baseball as well.
I have spoken to Tracy Hackler of Panini America before about bringing back some of these great Pinnacle products into today's collecting. Not sure if I made my case enough, but you never know.
at August 10, 2017