Super Bowl 42 is a game that I will never forget. The undefeated Patriots who barely took down my team in Week 17 to go 16-0 was facing my team once again but this time on the leagues biggest stage. Of course all experts, including myself, was thinking they would run the table. But, what they didn't know was that this was a very special unit. A team that surprised three other teams in the playoffs to get there and an ending to a game like no other.

I remember sitting there late 4th quarter. 3rd down and Eli has a million Patriot players around him. I had my head towards the floor waiting for the inevitable sack. However, for some odd reason, it was taking a bit longer so I looked up to see Eli scrambling around and then just tossing the ball up in the air for grabs. "There it goes, another Eli interception" I yelled out loud with my father, mother and wife by my side.

Then something incredible happened, a NY Giant jumped up between two Patriot defenders and pinned the ball to his helmet using incredible strength as the Patriot player, Rodney Harrison, was trying to pry it away.

Then the rest was history, a few more short passes before Eli tosses it up to a wide open Plaxico Burress. I had tears of joy stream down my face and I bolted out my door in the middle of winter wearing only my pajamas and celebrated in the snow. It was amazing.

I will never forget that image of the helmet catch or the game.

So when I can pick up a piece of that game, I will do it. I hadn't ever heard of these Post Season patches from Topps but they look great even for a Manu patch. I even bid $8 to snag it. Not something I normally do either. But, I desperately wanted it and as it goes in the hobby, if you truly want something, sometimes you just gotta pay. 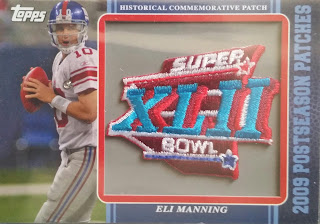