Being A Hardwood Leader

The very first post on this blog for 1995 featured 1995 Fleer football and my desire to collect it all. So what do you think happened when I discovered 1995-1996 Fleer basketball...well...sort of the same appreciation.

My mother had been wanting to take a trip to the local big box store Ames for some necessities we really needed,  so we finally took the trip. It wasn't like the store was a million miles away, it was just 20 minutes away. It was more about finding time around my father's busy work schedule.

My plan was to go into the store in hopes of finding a new Power Rangers figure to add to my collection, but my trip didn't go quite as planned.

As soon as we exited the car, I immediately made headway for the toy section only to be stopped in my tracks by this drop down card pack dispenser. Within this dispenser the words Fleer glistened to my eyes. But, the package didn't look like the football one, so I took a closer look and saw that it had 1995-1996 Fleer basketball Series 1 written on it.

I wasn't sure about grabbing a couple of packs at first as basketball wasn't a sport I really knew much about. At the time, the only names I knew were Michael Jordan-who didn't-Patrick Ewing and John Starks only because my father was a Knicks fan. Outside of that, I didn't know much.

So I grabbed three packs just to give them a try, it was Fleer. It had to be good right? Not to mention, it was affordable at $1.49 a pack. Man do I miss the days when packs were more affordable.

Let's skip past the rest of the boring shopping trip as you don't want to hear about my mother's bathroom cleaner and kitchen necessitates pickups. Unless you really want to, I can tell you, but I will skip it for now. We will fast forward to me opening thepacks in the car on the ride home. This is something I still do today. I can't wait to get home to open packs, boxes or packages. It's gotta be done immediately.

As I ripped into the pack, the designs were a bit similar to football but they only seemed to have four different ones vs football that had six. They were once again sorted by team so it wouldn't be too hard to sort them. There were 11 cards in each pack and two of those being inserts.

Here are a few examples of the base card designs. 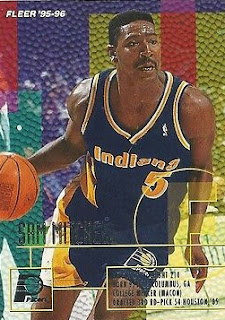 (I found this card on eBay with someone listing it for $300 because it's "rare". That's insane) 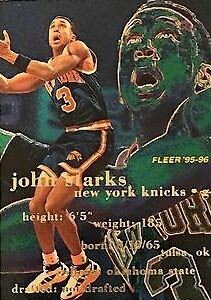 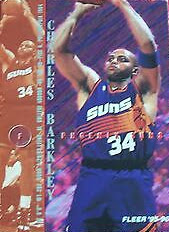 Like I said, they look similar. They didn't however grab a hold of me like the football ones did and maybe that was more to do with it being basketball then me just not liking the cards. The inserts were also a bit bland versus the football ones. I felt the base cards looked better than the inserts I pulled.

That didn't mean that 1995-1996 Fleer completely disappointed me though. It was that extra one-per-pack insert that caught my eye big time!
No surprise, just like with the football, it was the Flair insert.
Flair Hardwood Leader inserts fell one per pack in the first series and I pulled three decent ones you could say out of my three packs. The cards were double thick like the Fleer Flair Preview ones and feature each team's statistical leader or award winner from the 1994-95 season. It was the front of the card that drew me in with the color player photo, unique font and the team colored key as the background.
Just like with the Football Fleer Flair Previews, I wanted to collect them all.
My first two packs had players I didn't know at the time but would a few years later when I became a Knicks fan.
Pack 1: 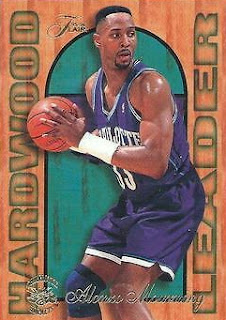 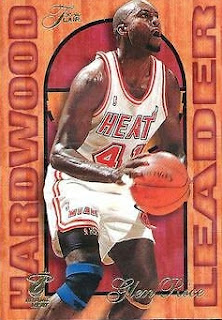 However, Pack 3, had the main man. I wasn't sure how to react other than feeling I had hit the lottery. 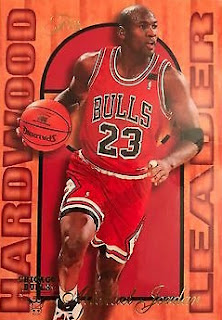 Because we didn't go back to Ames often and with the hobby rising in my area, it didn't take too long before Fleer was sold out and never returned. My quest of completing the 27-card Hardwood Leaders set wasn't accomplished and still isn't to this day. I am missing at least 20+ cards as I traded some over the years as well. A move I completely regret.
Have I given up on attempting to get this set, certainly not. I may gather what I have together and see where I stand and try to chase down missing pieces. The Hardwood Leaders have just become another need on my lengthy 90's set want list.
at August 08, 2017