In 1995 while everyone else was running to theaters to watch Braveheart, Seven, Toy Story and Golden Eye, there was only one movie I really wanted to see.... 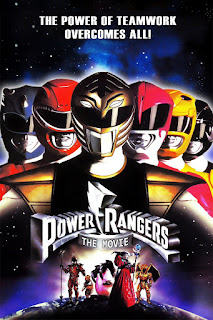 That's right, the Mighty Morphin Power Rangers Movie! However, my parents weren't ones to go to the theater so I had to wait for the VHS release.

Even though sports had infiltrated more of my life now, I still didn't leave my dreams of becoming the next White Ranger to replace Tommy and kiss Kimberly. Yeah, she was a total crush. Not to mention, each Ranger Tommy played was pretty stinkin' awesome and better than the rest.

While I was waiting for it to come onto VHS, I was fortunate enough to find a pack of the 1995 Fleer Ultra movie cards at Ames. It was the last one on the shelf if that tells you how popular that show really was. I was disappointed they never brought in more.

Before I show off the cards, here is a recap of what the movie was about.

On a construction site there was a giant egg that had been uncovered. That giant egg had one of the most evilest rulers ever and one that ruled the earth before being taken down by Zordon and his group of warriors, otherwise known as the Power Rangers. Lord Zedd, Rita Repulsa, Goldar, and Mordant the current bad guys against the Rangers arrive at the construction site and crack open the egg, releasing Ivan Ooze after 6,000 years.

Ooze then starts to take over. He locks up Lord Zedd and Rita Repulsa in a snow globe, destroys the Power Rangers command center taking the Power Rangers powers away and almost killing Zordon and he uses his ooze to hypnotize the adults to unbury his evil Ecto-Morphicon Titans that were war machines he had built before his demise to Zordon and crew.

In the meantime, the Rangers knew their powers were drained and knew they had to save Zordon before it was too late. Robot assistant Alpha 5 sends the Rangers to the distant planet Phaedos to obtain the Great Power and save Zordon and the world.

Ooze finds out that the Rangers were after the great power and sends his Tengu warriors, giant birds, to destroy the Rangers. Luckily for them they were saved by an old friend of Zordon's named Dulcea who was warrior of the planet. The Rangers explained to her the situation and she helps take them to the ancient ruined temple acquire the power of the Ninjetti. Dulcea awakens each Ranger's animal spirit and the Rangers made their way to retrieve the Great Power.

I won't tell you how it ends or anymore parts of the movie because nobody likes a spoiler. I just wanted to give you the basics.

In June 1995, the same month as the movie, the Mighty Morphin Power Rangers Fleer Ultra movie cards were released. The base set has 150 cards featuring scenes from the movie and up-close pictures of each character.

Here were the cards in my solo pack break.
Rocky is pictured here taking down a Tengu while Bulk figures out what was in Ivan's container. 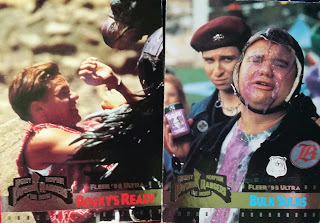 Goldar and Mordant realize they need to work with a new boss or they will end up in the snowglobe too! 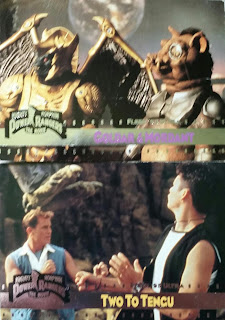 The three best Power Ranger villains of all time on this card in my opinion including Lord Zedd who was the best of all. I loved owning his action figure, wished I still had it. 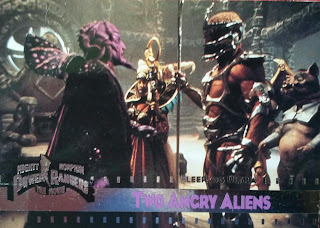 The product had some chase cards as well.
There were 24 Power Pop-Ups that were inserted 1:1 packs and were literally pop-up cards. I got Mordant. Not my favorite. 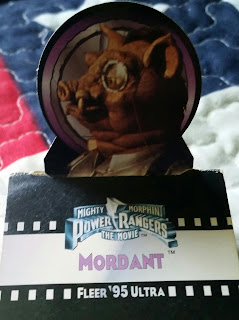 There were also 12 Holograms that were randomly inserted 1:4 packs. I am showing the base card first as I was fortunate enough to find that as well as it's 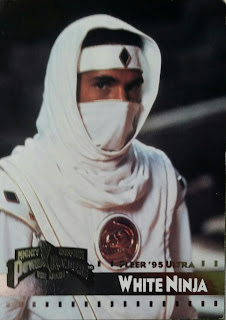 matching Hologram. Ths was my favorite card of the pack as I loved holograms and I have already mentioned my fondness of Tommy. The only problem I have is that the card has a lot of wear and tear on it over the years and many scratches. If only I had known how to have protected the cards better back then. 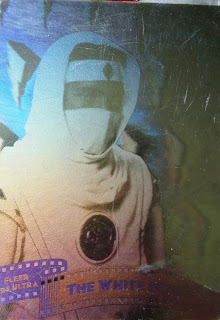 There were also 8 Holofoils randomly inserted 1:18 regular packs that I didn't find in my one pack. I was pretty happy with my findings as it was however.
Hopefully someday down the road I can find some more packs to open or more cards from the movie to add. But, I at least have these to remember it by.
Speaking of the movie, I never gave you my thoughts on it. I really liked it and I liked how after the movie they tied in the new episodes based off from it. There are a lot of shows that don't do that. I also really liked the story line as well and some of the extra action they didn't provide in the TV episodes.
at August 09, 2017