Five months are over in this promo and five prizes have been given away while the other prize lot is building up big time with inserts and hits galore! That prize will be for the one who can MLB Pick Em Champ.  So this is newbies last chance to win a prize and for those who won't make the playoff run.

Anyways, I posted the picks for the first week of September yesterday. Everyone has a clean slate for the September prize but have their points from April, May, June, July saved for the overall promo in those standings and this months will be added as well.

But, with a clean slate, that means anyone can enter to win this prize pack for the month of September, 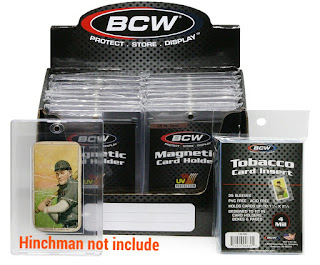 A box of 35pt Magnetics, some Tobacco Card needs (the Hinchman is shown as an example of how the cards fit, and the Topps prize for the month will be a MYSTERY AUTOGRAPH!

There is only one way to win it however, join in on the September MLB Pick Em!
at August 29, 2017