We all remember our first. Our first field trip, our first Fanny Pack, our first Slap Bracelet, our first bowl of Oreo O's Cereal, our first kiss, our first date, our first sporting event and of course our first big hit from a pack of cards. Well, that last one is for card collectors.

Mine came thanks to 1995 Fleer Ultra football Series 1.

The packs costed a little more, $2.29 for 12 card pack, than the other products I have previously opened, but the packaging looked nice and I wanted to give it a try.

So I grabbed a few packs with my father's approval.

Before I get to my first boom story and what happened after I grabbed the packs, I will give you some background on the product.
1995 Fleer Ultra came in two series, which consisted of 550 cards between the two. The series two set is also known as "Ultra Extra" and not so much Ultra Series 2.
The base cards for both series looked very nice. Full color photography with just a touch of a gold crown at the bottom that contained the players name and team. 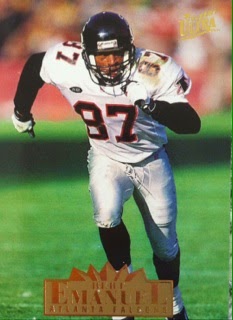 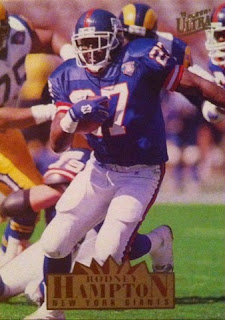 The backs of the cards even had my smiling. I don't usually take a card back focus on these posts, but here it is well earned. Three different colored photos with one in sepia added a nice touch to the back of the card along with the players name and position are in gold. 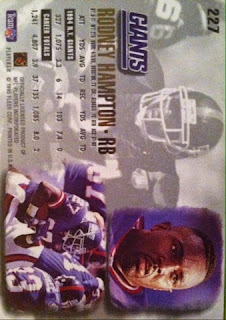 Speaking of gold. you get one Gold Medallion per pack as well for both series. These are very easy to spot and probably one of the coolest parallels ever made. 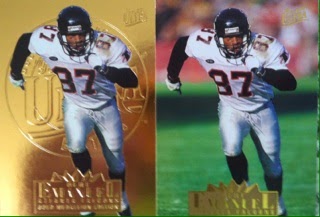 The rookies in the product were just the same look as the base cards. You just had to know who the rookies were in 1995 to spot them for the ones in NFL uniforms. Some of the rookies were featured in college uniforms still. 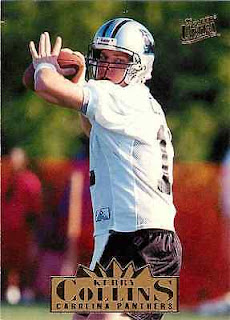 The only difference between Series 1 and the Series 2-Ultra Extra-was two subsets that looked awesome. My favorite of the two were these Extra Stars. It takes all of the big names and gives them this team colored appeal. 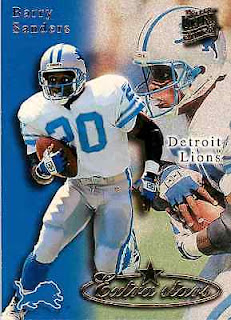 The other subset is this rookie one which isn't technically rookies as Series 1 had those. But, they are very sharp in design. 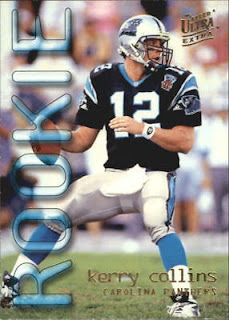 I won't spend anymore time talking about Ultra Extra as a lot of my focus was on Series 1 and that's where my story comes into play of my first good pull.
Packs of Ultra also had one insert per pack along with the Gold Medallion. Some of the inserts had harder odds to find than others with a broad range of 1:5-1:370 packs. The designs on the inserts were magnificent and totally 90's! I can see why the cards costed a bit more than the others I had busted.
Here is visual of a few. Most of the inserts had Gold Medallion parallels to. They weren't quite as golden as the base card parallels with only a little marking on them. 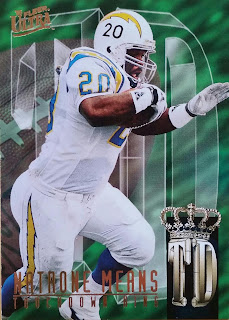 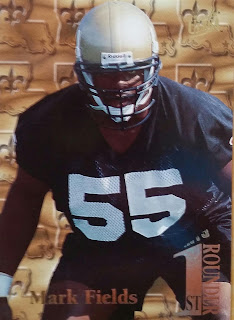 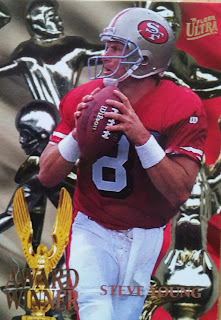 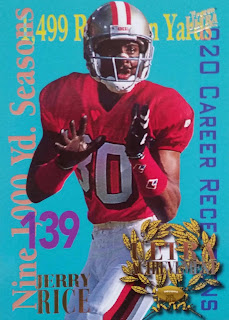 So now that I gave you some background on 1995 Fleer Ultra football Series 1 and a bit on Ultra Extra, let's dig into my story.
I started this bad habit back then and still have that problem today, I can't wait to get home to open packs or even mail days for that matter. It's gotta happen immediately. This time, I hadn't even hit the motion activated doors to exit the store before I had opened two of my three packs that day. Those two packs had the usual gold medallion and insert per but when I got to the third pack there was something a bit different I could spot in there. So continuing with tradition, I beat around the middle of the pack and did my slow reveal of the card within..... 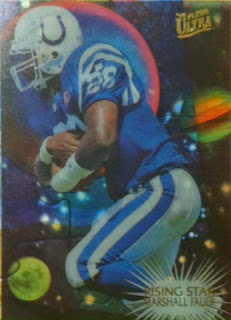 A stinkin' sweet Rising Star card printed on acetate that fell 1:37 packs! (there was also a gold medallion parallel that was 1:370 packs and the toughest card to find)
I felt like Steve Urkle with the card shaking in my hand saying to myself, "Did I pull that?"
I couldn't wait to get home and and put it into a top loader. This card was simply mind blowing.
Since then I have added a Brett Favre version of this card to my collection and hope to add the rest and put together the non-Gold Medallion set. This is another set for the Sets I Am Seeking List.
This will always be a memorable collecting first for me.
at August 22, 2017