@oriolesrise was someone in the last couple of months or so I have begun to follow on Twitter. Before that, we would still have conversations about his postings but I never actually had followed til I realized I wasn't. It was shameful I wasn't already.

Anyways, he posts some really cool stuff and as we began to talk a couple of weeks ago, he had posted a few things I really wanted and he nicely set them aside. We quickly, very quickly I thought I was dealing with The Flash, agreed on a trade and a deal was done. The only problem I am having with the deal is that my end hasn't arrived to him yet after almost a week. Gotta love USPS. If it doesn't, I will just have to send another and hope that arrives. But, I am hopeful that USPS will do their jobs and get what I sent to him. I have never had a PWE get lost before and I don't want this to be a first.

In the meantime, @oriolesrise mailed mine right out and I got it in two days.

A cool Fleer Giants schedule sticker for my PC from 1989 I believe. 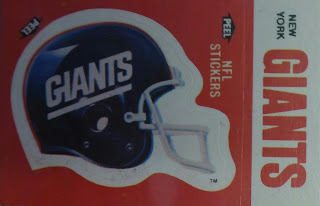 Up next, a cool unopened Pinnacle Cooperstown set that had a Griffey I needed. I am not sure yet if I will open or keep it sealed. 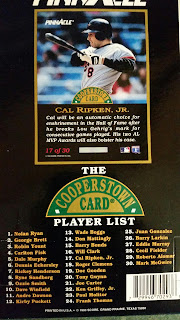 And finally, the big draw in for me was this Pinnacle The Naturals set. It also has a Griffey I needed and just looks stunning overall. Once again the set is sealed and I am torn on whether I want to open it yet or not. 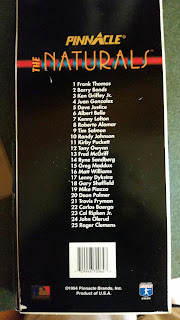 A big thanks goes out to @oriolesrise for the mail day. I hope my end arrives to you soon and that we can work out future deals down the road. Go give this guy a follow people if you haven't yet!
at August 21, 2017