My Origins Gave Me Goosebumps

I like to think that most of us who collect cards came from collecting something else first. That's at least where my origins of collecting began.

When I was younger, my mother was a huge horror/supernatural fan. I can't remember a week where she didn't go to the local video store to rent 7 VHS horror tapes for 7 Days for $7. Once in awhile my sister and I were lucky enough to be able to pick out something we would want, but it wasn't every time.

Some of my mother's favorite movies include the Friday The 13th series, Halloween Series, Nightmare On Elm Street series and the Child's Play series. I can't count the times I saw Jason, Michael, Freddy and Chucky take down some innocent victims.

I think some of her love for those types of movies rubbed off onto me as I found myself writing about horror/supernatural in graded school (here are some old, old samplings I did),
Blood Shed II 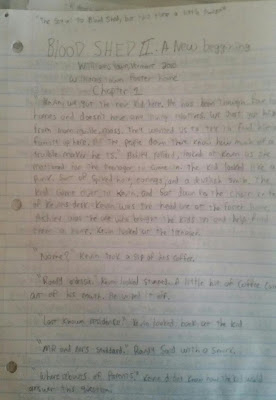 The Night Of The Scarecrow 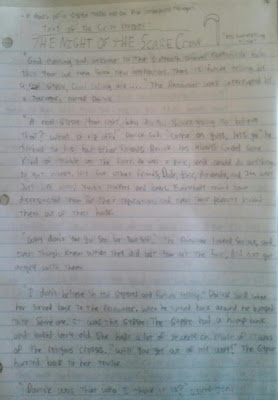 Creature From The Graveyard 1
And reading it as well.
That's where my fandom of Goosebumps began.
A lot of the books you see above are from my personal collecting over the years. I would wait for the latest release to show up in the Scholastic book order or book fair at my school. There are some I found at yard sales the last few years to fill in some gaps but I am still a ways off from having all 62 books. I am not collecting the spin-off series ones.
The first book of the series, Welcome to Dead House was released in the summer of 1992 and I believe is still one I need. It wasn't the first book I read of the series as I was one book late to the party.
My Goosebumps addiction started in Book 2, Stay Out Of The Basement.This one intrigued me because of the dad doing experiments in the basement with plants and soon was becoming apart of it himself as shown on the catchy cover art 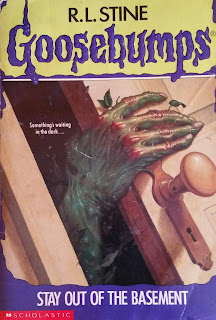 Goosebumps also presented a few books with multiple sequels. One of my favorites was Monster Blood which had three sequels in all. I just found out recently about the 4th one and need to find that sometime. 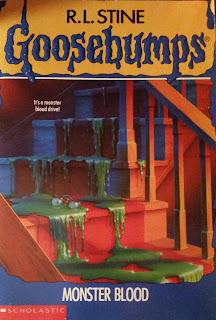 But, no series in Goosebumps got to me more than Night Of The Living Dummy which was Book 7. By far one of my favorites as I was a big Child's Play fan. As you can see, it's a little rough as I read it a few times. Slappy had me coming back for more! Luckily there were two sequels to it as well including 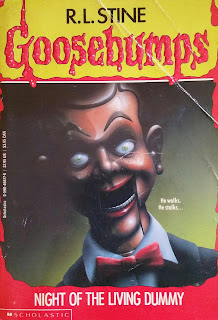 the third one that had collectible trading cards inside.... 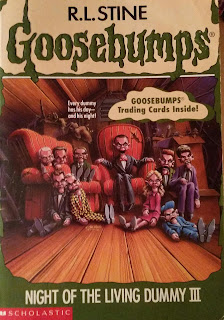 and not one got ripped out after 20+ years. That's just how I roll! 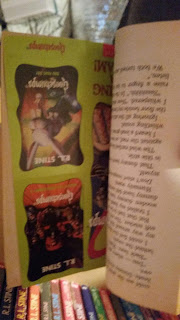 When it comes to collecting the rest of the ones I am missing, I will only accept the classic versions for my set. An intermixed one would drive me crazy since they both look so differently. Scholastic re-released the series to build up the movie release and the cover art and appeal is just not the same.

Here is one of the re-releases which happens to be Night Of The Living Dummy someone bought me last Christmas: 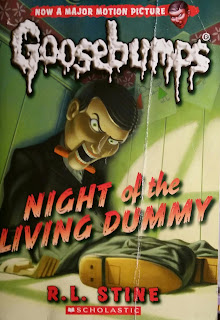 Which Slappy cover would you choose looking at both of them??
Speaking of the movie, I of course had to buy it. Sadly though, I have not had the chance to sit down and watch it. I have heard mixed reviews on it so hopefully when I watch it I won't be disappointed. 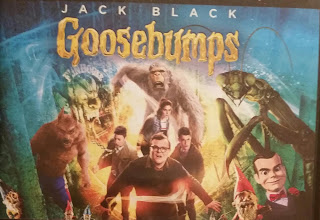 As for my horror writing and movie watching today, it doesn't exist anymore. My wife wasn't a big horror fan so I began not watching it which led to me not reading or writing it as well. So my spare time instead goes to blogging, sorting, advocating sports cards.
Do I still go back and revisit my old writings and skim through a Goosebumps book? Yes I do. I think its very important to remember our origins and this was only Part One of mine.
at August 02, 2017