Before social media, email and texting, there was a thing called writing. Something you did with a piece of paper and pen or pencil. With that piece of writing you, only you controlled what you put down on that piece of paper. You decided if it was spelled write as nobody else was going to override it. You used your hand motions to make letters and not just push a button. You also had the option of putting that piece of paper you had written on and handing or mailing it to someone else without hitting the send button. Human interaction believe it or not!

Where am I going with this, well I am going to 1996 and to when I was in school. My school participated in a pen pal program where you would basically write to people you didn't know and who it was depended on what grade you were in. My first pen pal was from another state or country and a kid named Daniel if I remember correctly. Somewhere I have a picture of him still. We became cool buddies through the mail exchanging letters quite often then it was over when the next year came as we didn't have a chance to keep up.

My last pen pal was my one that made the biggest impression on me and one I had a chance to meet in person.

This time it was a trucker who traveled all over the country. This was long before the movie Joy Ride came out and more about the time Space Truckers was released. So instead of worrying about him finding me and trying to contact me by the name "candy cane" he was instead pictured as some cool space dude. I don't remember his name anymore sadly and lost my letters over time.

The one thing we would always write back and forth about was card collecting and it was something he was into as well. At one point we got to talking about the missing 1995 Fleer Flair Preview Rodney Hampton from my set and he at one point told me he would do his best to find me one. Being a kid I bought right in. If I had been told that now as an adult, not sure if I would have been so gullible.
A few months later, the trucker scheduled a visit to our school. I was out sick that day so I was a little disappointed I wasn't able to ever meet him. But, the following day back at school the teacher handed me an envelope with a letter in it. I opened it up and BAM out popped this.... 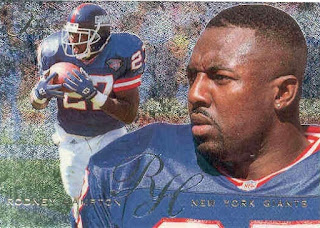 He said he found one on the road after stopping at a few places and was more than happy to help me finish my set. It was one of the most memorable collecting stories I have. I still have this card today and reflect back on that day.

I did write the trucker back to thank him and tell him I was sorry I missed him. We communicated for rest of the year before I moved on from that classroom. It was a kind thing that he did and I will always be grateful for as a collector.
He may have been my biggest influence of why I give away so much on here and other places.
So if you are out there and reading this, thanks again my friend!
at August 29, 2017