The one thing about growing up on a tight budget and trying to collect, you were always out trying to scope out some deals. I still do this today. But, as a kid who only earned a few cents at a time from his grandmother and got cards when his parents could afford to, you tried to make the best of what you could get.

A couple of posts ago I discussed affordable products and how the 1995 Topps football fell into that category at $1.29. But, one product was even more affordable and according to it's title, was the Collector's Choice.

12 card packs of 1995 Collectors Choice football had a retail price of .99 cents per pack. Yes, under $1. That's cheaper than the junky packs you find at Dollar Tree today that are usually 5 card packs of base cards. This .99 was a fun and worthy investment.

1995 Collectors Choice football was released as a 348 card set then later on came a 225 Collectors Choice Update set. So you are chasing down well over 500 cards of affordable goodness. I also liked Collectors Choice for it's player selection with such a deep checklist. Not very often you see an offensive lineman or a kicker get a card anymore.
The regular release kicks off with the 1995 Rookie Class taking up card numbers 1-30, 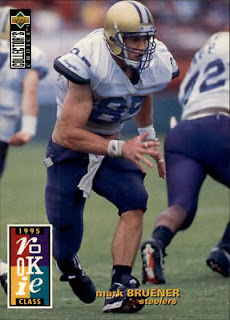 Followed by Did You Know with cards 31-50 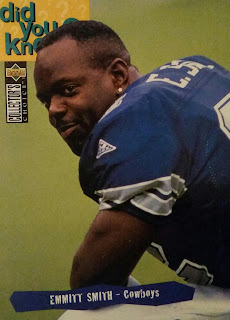 Then came the majority of the regular base issue that had a white border with action photos. (some of the card pictures for the base below are from the update series but it's the same design so I didn't separate it) 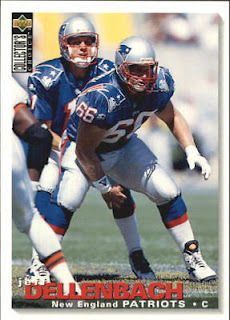 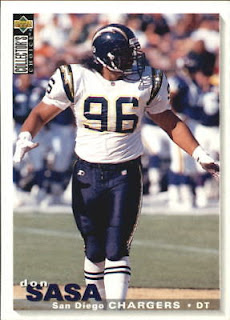 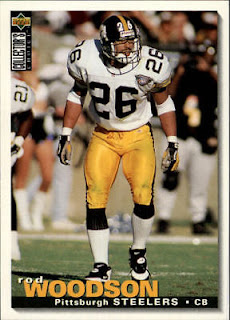 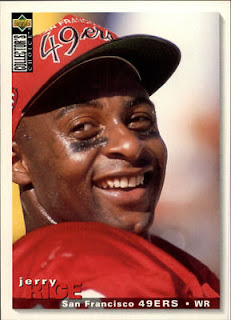 To finish up the regular release was the Jacksonville Jaguars and Carolina Panthers expansion picks. Sorry don't have a picture of those.
The only difference between the regular release and the update were a couple of subsets and newer players. Well, besides the U prefix on the base card numbers.
Subset one for Update was The Key. These were "key" players on NFL teams that opponents needed to stop. Some of these players included rookies from the 1995 class. 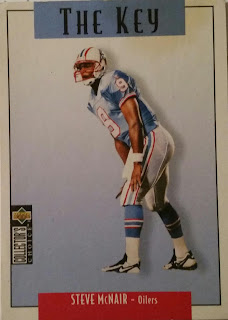 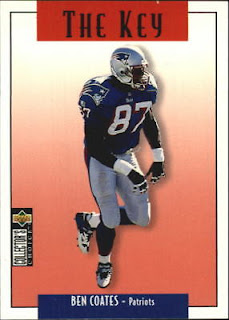 I think the rookie card design got a huge upgrade for the Update series. These included the first rookie cards in Collectors Choice of Terrell Davis, Curtis Martin, Kordell Stewart and others. 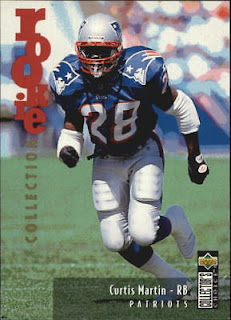 Inserts for both products had some similarities as well.
Every pack of the regular issue came with one of these Silver Players Club parallels per pack. 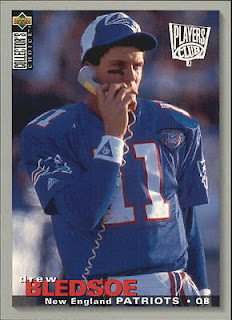 While the Update version had an insert also per pack but took a fun approach and added in Stick-Ums NFL Stickers. I loved collecting these and still have a good stack of them on my desk I had dug out after taking pictures for this post. Oh, the memories! 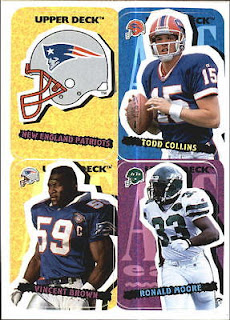 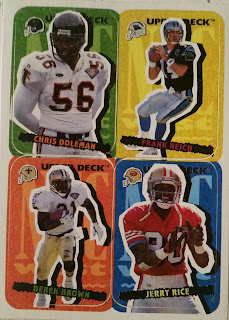 There was also Team MVP Stick-Ums that was one player focused and fell 1:4 packs.
Update did have parallels too. They were randomly inserted 1:3 packs for Rookie Silver 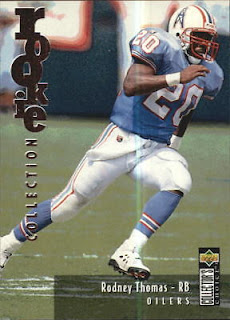 And 1:35 pack for Rookie Gold versions. 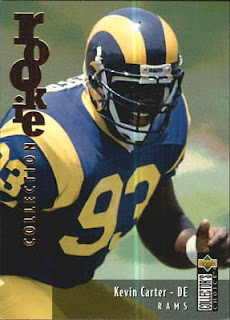 The base cards didn't have parallels just the two main subsets. The Key had parallels of  Silver that fell 1:5 packs and Gold at a tougher 1:52 packs. I did remember pulling a few of them but couldn't locate them in time for this post.
Just like with baseball, football had You Crash The Game cards. The regular issue had You Crash the Game cards that fell 1:5 packs and if the player does what the card says, you could exchange it in for a set of the same matching cards whether it's gold or silver depends on the card you send in. 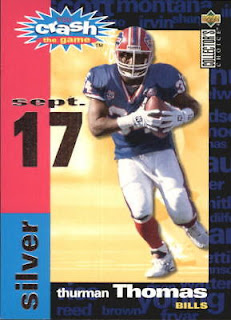 The Update version was a later release and focused on the playoffs. The version in that product wasSilver and Gold You Crash The Game The Playoffs. Silver fell 1:5 packs while Gold fell
1:50 packs. 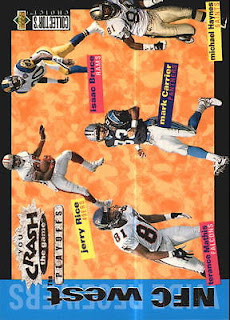 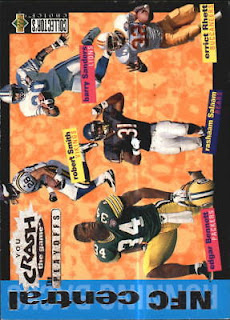 These cards were similar played like the regular ones. However, the difference being, if any of the players pictured on the card threw or caught a touchdown pass, or rushed or returned a kick for a touchdown during the 1995 NFL Playoffs and Super Bowl XXX, the card could be exchanged as a winner.  So instead of getting one chance at winning, you had five.
I wonder if I ever won on these. I never exchanged any in if I did. I would guess since 1996 was the deadline for submission, I must be just a little late on trying it but am a bit curious what would happen if I did.

As you can see there was a lot of similarities between products and sports from one company. There were also some differences that made them stand out. I think this goes for collecting as well. We all have similar interests, but our own unique-differences that make us stand out for what we collect.
at August 21, 2017