Scored From The Beginning

1995 Score football was my first taste of Score, a product that has been a collector friendly since 1989. Since then, I have bought some every year. It was the 1995 version that helped me fall in love with Score. It was an affordable product that costed less than $1.49 a pack and had many draw ins with foil inserts and fun designs on base cards.

When packs of 1995 Fleer football ran out, in came 1995 Score football and in came me to buy some packs and give it a try.
The base card design was simple and fun for a 12 year old. It focused on the key player and had a ripped logo at the bottom. 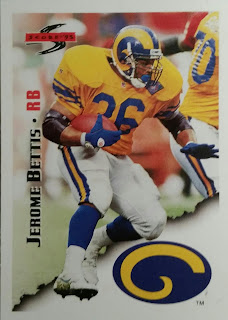 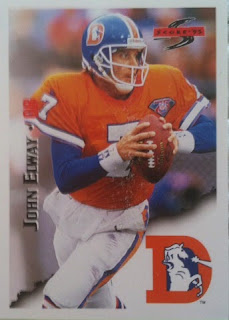 Star Struck was one of the subsets in Score. It featured players "posing" for the Hollywood cameras with their flash on and fans/players reaching out for them because we are all star struck by them. 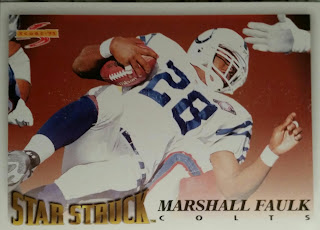 The rookie cards were featured in college uniforms for an early NFL product and are not photoshopped or logo-less like today's. I assume this product released just after the draft and pictures from the premier couldn't be used, but at least the players had an NFL team helmet on the back to let us know who they will be playing for. I miss the days where college products were integrated into early NFL ones instead of being on their own. I feel today there are way too many products college, especially repeat ones from one company. I think NFL/NCAA integration is the best route to take there.
For rookie cards, I was always on the chase for Kerry Collins and Steve McNair which both I pulled in my first five packs but not as many times however as I pulled this guy.... 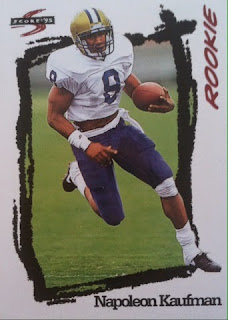 The inserts and parallels in Score were fun to collect. In the packs when you opened them, it wasn't too hard to spot when you hit one with so much white from the base cards. My father and I use the same approach when we know there is a hit or insert in a pack, we look at all of the cards surrounding it and save the hit for a slow reveal. It's just like that moment on American Idol where they were about to announce the winner and got to commercial break. We both still do that today.
One of the parallels in 1995 Score was Red Siege, which took the base card and added a red foil to it. I pulled plenty of these back then.

Artist Proof was the other parallel that added a silver foil to the base cards and were a tad harder to find compared to Red Siege. I always thought the Red Siege looked better than the Artist Proof anyways. Sadly I never pulled one of these in 1995.  I had to buy this Hampton for my PC just to own one. 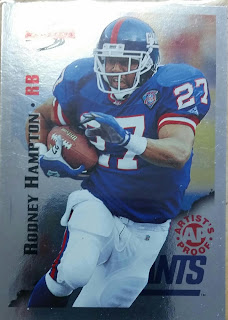 Offense Inc. where only a few privileged ones were allowed in this decent looking insert set. Besides the parallels, these were the only inserts I ever pulled. I never landed a Dream Team. 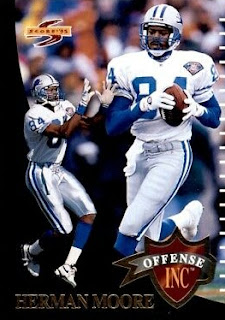 In recent years, 1995 Score football has been among the brands I have re-busted as an adult to revive those memories and it was just as affordable now as it was then. The Frerotte and Elway Red Siege above were actually my pulls from a five pack break and sadly were better than my pulls as a kid.
at August 07, 2017