If you remember my post a few weeks back, you will remember that I got some 90's packs in a trade on Twitter. Well, now it's time to reveal the goods from one of them! The other breaks will soon be coming, but I am starting with this one first. 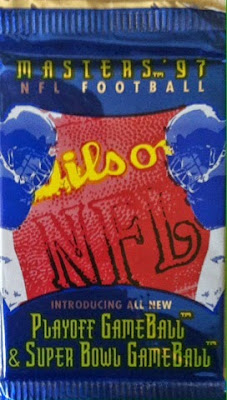 In every pack of 1997 Edge Masters football, there are 6 cards per pack and most packs can be found for under $3. There are chances at Playoff and Super Bowl GameBall cards.

The base cards have a light foil with an "exploding fireworks" design in the back. Makes for a fun design if you are into futuristic looks.My biggest nitpick on the design is the players last name across the top. It gets lost in the explosion. A different color may have helped bring those out better. 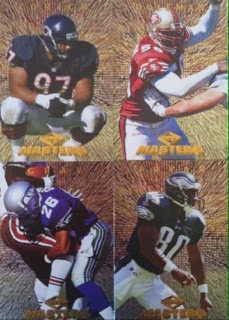 Here was my best player pull of the pack and you can see a better up-close pic of the name and what I was saying about it getting lost. 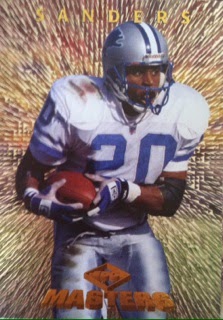 I also landed a PC card. I always liked watching Calloway play. I can only imagine how much better his career could have gone if he had Eli for his QB. 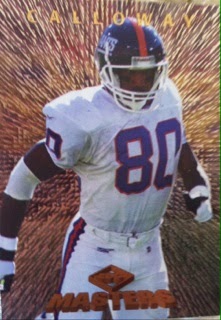 Overall, the Sanders and Calloway were good finds in this pack and to me if I had bought it, would have been worth it.
at May 31, 2015