Who remembers the joyful sound of opening Upper Deck NBA cards? It was the sound that made you realize that something special was about to happen. 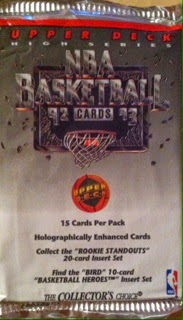 In 1992-1993 Upper Deck basketball, there were 15 cards per pack. There were chances at Larry Bird Basketball Heroes inserts and Rookie Standout inserts.

In one of the rare times that Upper Deck used borders in their base card set, they still did a tremendous job of capturing the game with their amazing photography. Please also excuse some of my pics here, I didn't realize they came out so blurry. 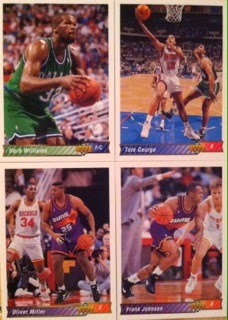 I really like these All-Star game shots. They really capture the emotion.

Found three rookies in this pack as well. Nothing big, but for a rookie card collector like myself, any rookie is good.

This photo caught me off guard a little. I wasn't sure if he was getting ready to drive to the hoop or catch a deer in a field like a lion. 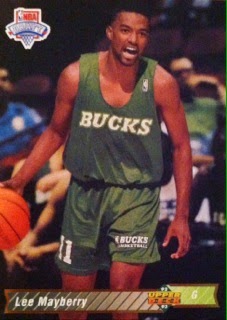 Overall, nothing big here. No Michael Jordans. No star players and no good rookies. But, it was just the magic of the base card photos that made it worth opening.
at January 09, 2015