The Origins Of A Cardboard Addict: A Goofy Collection

Grocery shopping today is a dreadful experience. You push and shove your way through the store for what feels like hours. You use most of your paycheck to shop, there are no sports cards and then you have to unload what you loaded up in your cart when you get home and put it away. What about that is enjoyable? Most of the time now I will just let my wife get the groceries while I put them away when she gets home. Team work at its finest!

Two others that used teamwork like that to get through an experience was Goofy and Max and their crazy adventure from A Goofy Movie that came out in 1995. I can remember watching the film on VHS like it was yesterday. Okay, maybe I did watch it on DVD yesterday, but that doesn't mean I didn't feel like I was back in 1995. 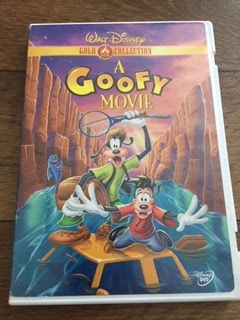 The Goofy Movie was a spinoff from the popular cartoon series Goof Troop and features the duo later on when Max gets to high school. The relationship between Goofy and his son was a rocky one with Goofy doing some pretty stupid things that embarrassed Max and pushed them further apart. But, after Max gets in trouble at school, Pete (Goofy's childhood friend and neighbor), talked him into taking Max on a cross country trip that would both challenge them and bring them together.

It  reminded me of the relationship my father and I had at the time with it being a little rocky. He sometimes made Goofy decisions I didn't agree with, I won't get specific but they weren't decisions that led to a lot of people disliking him and the rest of our family. So the further I could put myself, the better at the time.

But, just like the fishing adventure Max and Goofy took to Lake Destiny, Idaho, sports was our adventure and the one thing that bonded us which led us to card collecting together as well.

In 1995, it was the year that I was growing more into sports and card collecting. There were many brands we bought over and over again such as Score, Summit, Ultra and especially 1995 Fleer. There are so many that dislike 1995 Fleer but I am not with that group. I thought the base and especially the inserts looked great. The product also brings me much nostalgic joy.

Other than the base set and other insert sets I am chasing within the product, one of the most eye boggling inserts is the Gridiron Leaders. It's a 10 card set that fell 1:4 packs in 1995 Fleer football.

Thanks to @CardpocalypseNC, I was able to knock down three more I needed with one more left to go! (which he later knocked down for me as well, I will be posting the full set when he and I sum up our next trade) 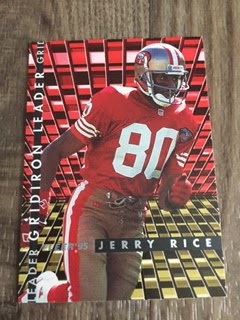 The cards featured a groovy disco floor look that is color appealing to the team they play for. The checklist features the top 10 Gridiron Leaders going into 1995. 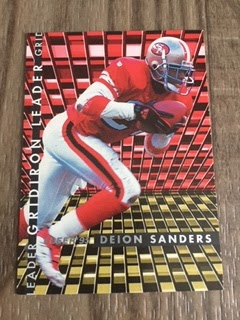 I bet Neon Deion would dance on this floor. 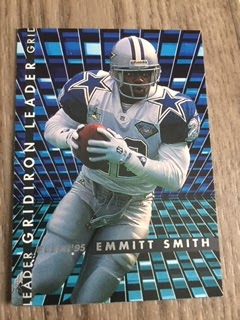 Emmitt would be dancing in the end zone.

I will be glad to get the final one of these in and finish up this set in hand.  That will mark two of the sets from Fleer that will be knocked down for me now. Other ones including the base set needs, are listed HERE.

As for my father and I, our relationship isn't rocky anymore just like Max and Goofy's turned out to be in the end. Sorry for the spoiler. Our relationship now is more of a long distance one that consists of every weekend phone calls mainly about sport cards and complaining about the NY Giants moves for a few hours. Occasionally we will trade cards through the mail as well.

Some may say that collecting and sports are a waste of time, believe me I have heard it, but they don't look at what those things may mean deeply to some and not just what they see on the outside. The memories, the connections, the love can all come from it. Everyone has their own fishing trip to discover sometimes to get closer to someone they love, despite some differences they may have. It's life, you only live once.
at March 30, 2019