It was 1994 and I was about to sit down to enjoy the television craze, The Mighty Morphin Power Rangers. Remember, the series that took place in fictional Angel Grove where five teenagers with attitude were chosen by Alpha 5 from the orders of the wise Zordon to protect the earth from Rita Repulsa. Rita was once locked away by Zordon in a extraterrestrial container but after 10,000 years of being imprisoned for her evil deeds, two unknowingly astronauts opened the container and set her free. Her mission was to conquer earth! So Zordon needed help to protect it and get Rita imprisoned again. Hence, the five teenagers who were giving morphin powers to do so. They had many weapons at their disposal along with big robotic machines called zords to fend off any of Rita's big plans with her evil aliens she sent to earth to destroy it.

In traditional ways before I started to watch, I went to my raid the cupboards for a snack or two. When it came to snacks of my childhood, my parents weren't the carrot stick and ants on a log type of people. They were the "whatever junk food snack was the cheapest" type of people. So I knew no matter my selection it was going to be good. One of my favorite junk snacks at the time was Shark Bites Fruit Gummies so I went and grabbed myself a pouch. One of the more popular fruit snacks of my childhood since it's release in 1988. 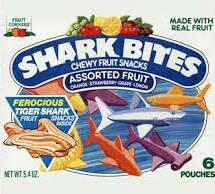 Who didn't love these? They were packed with fruity flavor! The best hunt when you opened a pouch was for the White Shark. Some pouches you would find one, sometimes if you are lucky two. But, there were many occasions you would find none and that was heartbreak. I would trade my entire pouch of all the other fruity flavors when I was a kid if I didn't find the white shark for a white shark. Not sure what it was, but it tasted better than the rest. I don't even think they told us what flavor it even was...ever. Didn't matter. It just tasted better and was the only gummy flavor that didn't have some transparency like the rest. That's how you know they packed all the flavor in that one shark.

So there I sat awaiting the newest episode with gummies in hand, life was good. Then a marketing commercial came on for the latest line of action figures from the Mighty Morphin Power Ranger series. The figures were called flip heads and they morphed the teenager into a Power Ranger! I wanted them SOOOOO bad but knew coming from a poor family that there was no shot I could just go out and grab them, but maybe could get one for Christmas so that was my plan of attack.

So I finished watching that episode since we didn't have DVR's or any way to pause live TV back then, how did we ever survive? Once again, Rita sent her latest alien creation to earth, the Power Rangers once again defended it and defeated evil with their zords. What a great half an hour! Even though some of it I was distracted for because of that commercial.

Here it is actually,

But which one would I choose to put on my Christmas list? Being a boy I would lean towards grabbing Jason, Billy or Zach at the time. Later on I had one specific Ranger I was fond of but that's for Part 2 of this series. Not that getting a Trini or Kimberly would be bad that way I could say I at least had one. Especially Kimberly, played by actress Amy Jo Johnson, who I had my first celebrity crush on. Surprisingly she still looks the same today.

In the end I chose Jason who was the leader of the Power Rangers. I don't know what it was but I always stuck to the leaders. I did the same for TMNT with Leonardo.

Surprisingly that Christmas I actually got my first Mighty Morphin Power Rangers Flip Head of Jason the red ranger. It was the coolest toy I owned at the time. Later on I would add a couple more figures from the set that my family sold off to my cousins for $1 when I got older. Yes, $1. I have told that story many times on here and how I regretted not having any of my childhood memories with me today.

Well, that has changed recently as I have been doing some trading and adding pieces back thanks to my buddy @Jake1725.

Here is one of the pieces I acquired. Even though I never had Zack before, he came along with a piece I did have so I took it anyways. 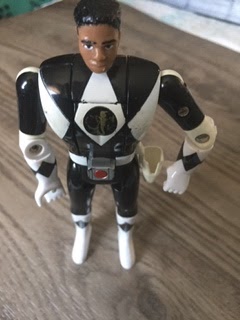 Zach as just a normal teenager.... 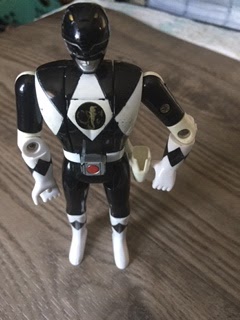 It's MORPHIN TIME! Mastodon! Flip the switch on his back and now he is the Black Power Ranger and is ready to battle evil!

When the battle is over, just flip his head back and he is ready to go back to school and set for another battle for another day.

In today's times, both the Power Rangers and Shark Bites surprisingly both co-exist 25 years after this memory, but are nowhere near what they once were. Not even close. But, that's the way everything is that comes back unless it comes back as the original like this figure did. It's still as cool now as it was then.
at March 04, 2019

Email ThisBlogThis!Share to TwitterShare to FacebookShare to Pinterest
Labels: 1993, 2019, Mighty Morphin Power Rangers, The Origins Of A Cardboard Addict, Zach