The late 90's. Is there truly any better time in the hobby?

The variety, the brands, the innovations, the value.

It's all in there.

For me there is also a bonus, the memories. This was and always will be my best time in the hobby. Nothing will ever change that.

So when I pulled off my last trade with Project Pedro blog I got the opportunity to take a trip back down memory lane with some packs/box breaks from my past. I loved every aspect of our trade, but these breaks were truly what hit me the hardest and what I enjoyed the most. With every pack I busted a smile can be seen for miles across my face and the next chance to open the next pack brought me joy like no other.

There will be multiple breaks coming up on here. So get ready to take a trip back in time!

Today. let's go back to 1996 shall we? That's the year I was currently starting to post about for Origins Of A Cardboard Addict blog. I had thought about busting these boxes over there, but instead I decided to keep them here and maybe this will be the future site of that blog as well and will continue my story of collecting here.

Even though it felt like only yesterday, when you actually think that 1996 was 22 Years ago, it starts to add some grey hair to your head if you grew up in that era. Which I am so glad I did looking at today's era both in the real world and in the collecting world. In the collecting world, we had marvelous Pinnacle. In 1996 it released another impressive brand with it's flagship football cards. I already had fallen madly in love with the 1995 version so when I saw it on the shelves it was a no-brainer to try.

When you open up the box you will find a paper envelope with a box topper inside. It is a Private stock parallel. I thought I did pretty decent finding a Faulk. 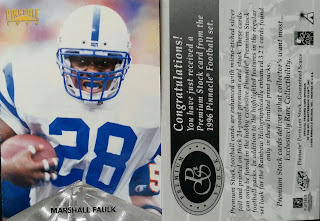 When it comes to the base, they look like....well....I am not going to show you today. I have an individual post for that for a reason. You will be amazed I promise and that will be the next upcoming break post for my series from Project Pedro Blog.

So let's jump right to the hits!

Trophy Collection parallels fall 1:5 packs. I found five of them in my break. Gotta love some dufex. There are also Artists Proof parallels that fell 1:48 but not so much luck for that for me. 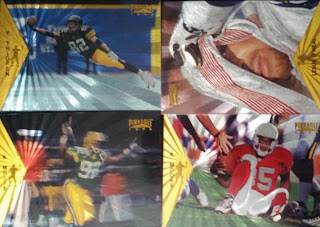 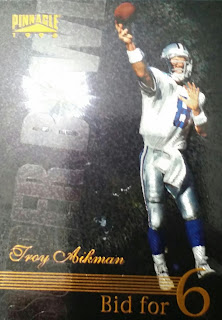 321 are fun die cuts of a players jersey and a player in the forefront fall 1:24 packs or one per box. I really dig the design. Wished it had been a better player, but either way, still a nice touch for my 90's insert PC. 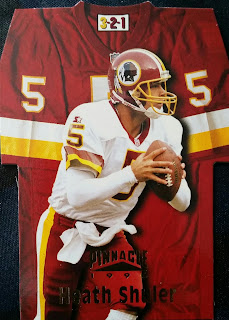 The box really promoted the insert Double Disguise that fall 1:18 packs. They are similar it appears to Mystery Finest. However, I have yet to get myself to peel them. It's a double sided, double protective coating card. I can say however, I can see a G through one side which leads me to believe that one side or maybe just the card in general is a Packer and possibly Brett Favre. 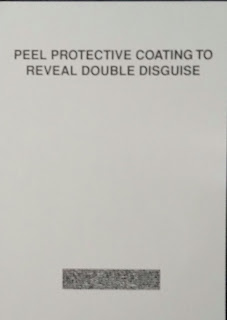 The only other hit I could have found was but didn't was the epic Team Pinnacle that fell 1:90.

I felt I did pretty solid with the box break and maybe even better if I decide to unpeel the card. But, when I do breaks like this it has nothing to do with value to me. So if Edgar Bennett is unpeeled, I am fine with that as well. These kind of breaks are for fun. And yes, fun still exists in this hobby and we all just have to reach down within and find it. Cards weren't always about money and value, they were collected for fun once. Something I still do to this day.

CONTEST ATTACHED! I will be giving away a few KEY rookie cards from this break via PWE. Please read this carefully to be considered in the drawing!
at February 28, 2018