The Shepard Tends The Black Gold

Onto Part 2 of my trade mail day from @90sNicheFBCard.

Today's is a lot of Sterling Shepard and some beautiful Black Gold cards.

Sterling put up his best numbers yet for the Giants in 2017 stepping in as the teams leading Wide Out. I believe the best numbers went to Evan Engram but that's because Sterling was hurt for a few weeks.

The Giants are expecting a lot more from Shepard in his third season which is coming up in 2018. And boy do I hope so after adding more and more of his cards in 2017. 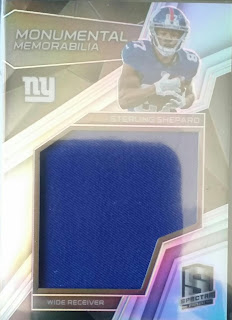 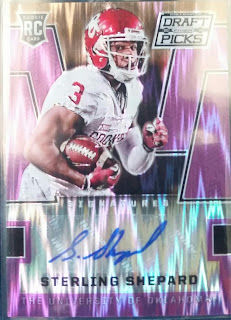 Not sure why they considered him a Modern Day Hero after his first year, but I like the full color photo used on this memorabilia card. 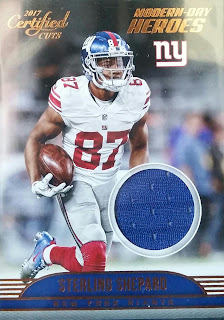 The combo of Giants blue against the Black Gold design and gold signature makes the Sizeable Signature card like look like no other. So, so happy to add that one. 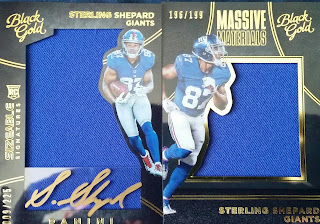 A couple of cards with multiple memorabilia pieces. The Rookie Tetrad even has Michael Thomas who had a big year for the Saints. The Gold Prospecting has a football swatch. 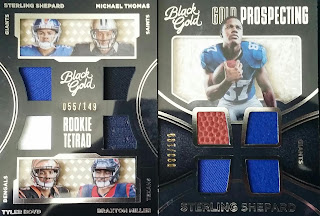 And to finish it all up. a no Shepard card but a sick Black Gold one featuring Odell and Andre Williams rookie years. A nice Team Symbols card. Panini puts out a ton of products, but none are even close to as elegant as Black Gold. 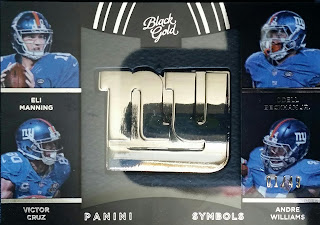 Two parts of my mail day one with one more left to go. That one is just one massive hit-fest and is being posted tomorrow.

Thoughts on today's mail day welcomed in comments!
at February 21, 2018