In my latest trade with the great Shane from Project Pedro Blog, I was able to trade for some boxes from him from the Black Friday sale on Dacardworld.

I could have chosen baseball, football, basketball, hockey or any other sport. But what did I end up with? Well, three boxes of 2015 Panini Americana.

My love of non sport cards continues to grow and my love of this product has as well. The price of a box being around $25 and under along with four hits is so enticing you just can't ignore it. The checklist of autographs and wardrobe relics you could hit has a good mix of superstars and people you may not know as well but it was enough to entice me to want more.

Today and Tomorrow I will break down the hits for the final two boxes I opened. Now we are onto box number 2.

Once again we kick it off again with another Freeze Frame. This one is of Hulk Hogans daughter, Brooke, 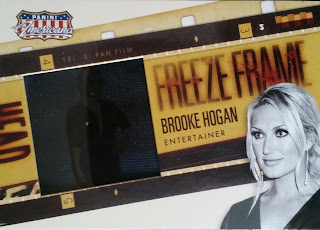 This box actually had a bonus parallel I hadn't ever seen in five boxes I broke, a green parallel. These are numbered to 25 and this one is of Audrina Patridge who was best known for her role on The Hills. 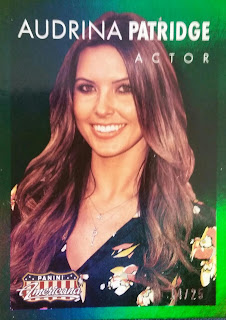 My first autograph find was of Alexis Knapp. She is best known for her roles in the trio of Pitch Perfect movies. Which by the way are pretty funny. I was thinking a corny girly singy type movie, not at all. Well worth the watch. 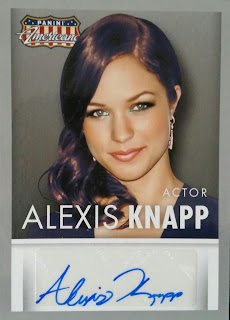 My next pull was this Laura Prepon relic. I best know her from her red head days on That 70's Show. She is now on the hit show Orange Is The New Black. 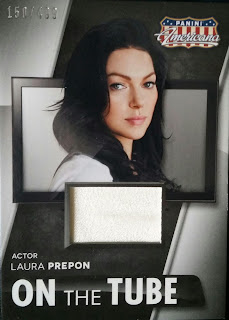 My next find was Ali Larter autograph.  She was in Varsity Blues, if you lived in the 90's you definitely have seen that film, and played on many sitcoms of the 90's. 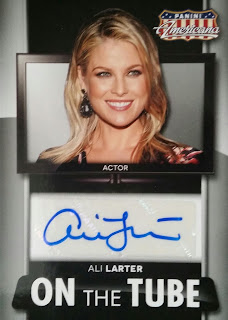 And finally, you don't have eyes like her. She has Bette Davis eyes. How cool is it to pull a legendary relic like this? 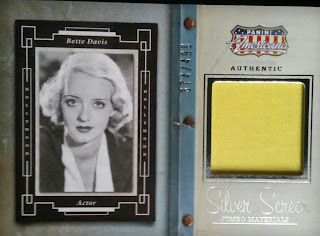 Once again, another solid box break for the price.  The autographs I found in this box were well signed as well. Sharp, readable autographs.
Box three will be posted tomorrow so come back for one more!
at February 01, 2018