When I Break Into A Pack Of Ultra, I Get The Sensation....

We have now entered into a New Year in real time here on Origins Of A Cardboard Addict and this will be my first post of the new year. I am sorry about the delay on here as Sport Card Collectors blog takes prescience over this one. There are days I feel like combining the two and continuing my story over there and then there are days that I just want to keep the two separate. No matter what happens, you will be able to continue to read my story.

For now, we are here so let's continue my story of collecting.

For those of us who collected in the 90's, Fleer Ultra was a standby product you knew what to expect from it. You knew there would be great photography. You expected Gold Medallion parallels-Of course none ever looked as good as 1995-You also expected some unique inserts. One thing none of us truly expected was a spinoff product. The one thing about spinoffs, they are never as good as the original.

That's the way I felt about this product but being a die hard fan and collector, I had to chase some.

I can't remember the store we ended up finding some packs of 1996 Fleer Ultra Sensations, but we grabbed a few expecting to be blown away like we were with the regular Ultra issue.

The 12-card packs carried a suggested retail price of $2.49. Each card in the 100 card set was produced in five different foil border colors with each inserted at various ratios. It was a parallel base set nightmare. Even though some base did look attractive in the different colors.

Here are three of the colored versions I could find for this post, 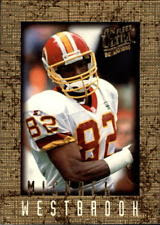 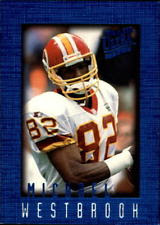 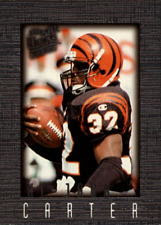 As you can see, they are not the usual quality we expect from Fleer Ultra. The photographs are not superb, there is a lot of border and the special feeling that Ultra brings is lacking.
However, I did add some of these for my Rodney Hampton PC which is still lacking that tough elusive rainbow one. Speaking of that if you see one, let me know!
This product was one and done. I can see why it was. Some at the time considered this Ultra series 2, which I did not. I couldn't put the word Ultra with this product and separated it that way in my binders and boxes at the time.
There is nothing worse than when something is a spin off or a remake. Nothing ever beats an original and I would surprised if you could argue other wise because you all know it's true.
at February 14, 2018