I recently sent a few things to my most frequent blogging trader buddy Baseball Card Breakdown and in return was sent some pretty sweet things. Let's take a look!

Up first, some new New York Giants.  The Ottis Anderson is wack, I like the design execpt I think Panini could have made the top a tad bigger. A new Nicks rookie for my PC and a Eli blue Platinum parallel.

Up next, a couple of autographs of players I expected to pan out better than they did.
Greg Jones was drafted in the 6th round of the 2011 draft made an early on impression before injuries took a toll on him with a season ending injury and he lost his starting job. Since then, he hasn't stuck in the NFL but has had an okay Canadian Football League career.

Da'rel Scott, made an impression in the 2011 preseason enough to gain a roster spot behind Ahmad Bradshaw and Brandon Jacobs. Then was injured and signed and re-signed a few times  before heading to play in the Canadian Football League. 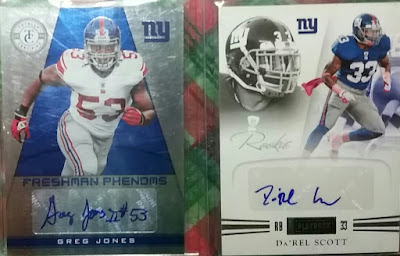 Up next, Ken may not be impressed, but I am to get this Gold Medallion knocked off my Griffey list. It may be a checklist version, but it's needed and the picture is fun. Many captions could be in play. 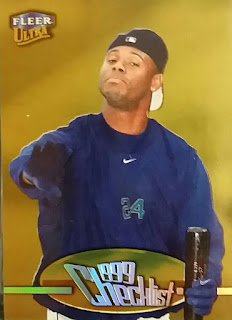 And an insert card I never pulled back when I was busting 1998 Topps that I always wanted was an Etch-A-Sketch insert. Now to own one of my favorite all-time baseball player is awesome. 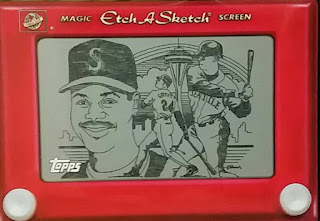 Just glad it wasn't an actual etch-a-sketch of him that I would have to keep that way. Those things were treacherous. I was lucky to draw a line.
I will also throw in, not picture though, that I was a lucky recipient of one of his amazing custom cards to. It's definitely a Pretty Girl (some of you may read between the lines on that last part)
A big thanks goes out to Baseball Card Breakdown on the mail day. I look forward to future trades with you as well! (already began setting more stuff aside)
at December 15, 2016